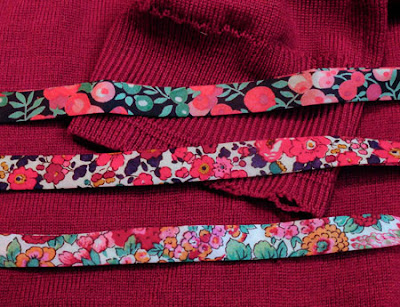 I am an admitted clothes hoarder. For the past couple of winters I've been resigned to the fact that the cranberry-coloured lambswool cardigan that I bought just before going to university has been wearing out at the cuffs. It wasn't an especially expensive cardigan, coming from Littlewoods (even the cheap end of the high street sold knitwear in natural fibres back in the early 1990s), but it's lasted 23 years so far. I've stitched up the loose edge of the cuffs in past autumns, but they are fraying rather more now. If it were more fitted, I'd shorten the sleeves for a 1940s look, but that struck me as a bad idea with this boxier shape. So the poor old cardigan was put on the pile for rag recycling.

I couldn't send the cardigan away. 'Look at me,' it seemed to be calling, 'I've kept you warm all these winters and so much of me is good! Surely you can salvage me...'


It struck me that Liberty bias binding could be exactly what the cardigan needed. TheWeaversMill on Etsy was selling it fairly cheaply, so I ordered three different patterns so I could see which one worked best with the cardigan.  The patterns were (top to bottom) Wiltshire (1933, redesigned in 1968), Betsy Ann (a miniaturised version of a 1933 print) and Elysian (a 1920s pattern). I loved Elysian but didn't think it would go with enough of my other things, and decided in the end that I preferred the dark background of Wiltshire.

The mending job was simply a matter of placing the binding over the edge of the cuff and sewing it down neatly, leaving a small gap at the seam for stretch so my hands could fit through. Years ago I cut the original buttons off the cardi – shiny gold wasn't popular in the 1990s – so I'm thinking of getting some cover-yourself buttons and using what's left of the bias binding to make buttons to match the cuffs. It no longer really works with the pink and grey tartan skirt I used to pair it with, but that's okay: I plan to make something new to go with the skirt, and this cardigan will look great with some of my navy things, hopefully for a few more years yet. 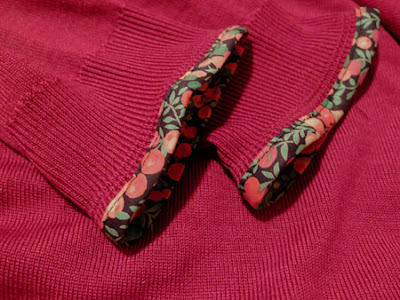 I also repaired the lining in a favourite skirt, the ripped seam on my Heyday! bow blouse, and re-sewed the hem on a velour tunic which is one of the few remnants of my gothier days but is OH SO COMFORTABLE. I also darned a handknitted sock, though not very well - I'm rubbish at darning. The repairs took a while as they were all done by hand, so the Miss Fisher marathon on Alibi was most welcome.

That's not all the mending that needs doing in the House of Robots. A few weeks ago a shelf came away from the living room wall in the night. The bang woke me up, but I thought the kittens had trashed something in the dining room – they aren't allowed in the living room on their own in case they get up the chimney – and after checking that they were okay, concluded it had just been the sound of their romping around on the dining room floorboards and went back to sleep. The next morning I discovered that the shelf and all the books that had been on it had taken out a chunk of the stone fireplace and destroyed our wicker wastepaper basket and Mr Robot's paperwork boxes.

The paperwork boxes are easily replaced, the basket was actually a Christmas hamper sent to Mr Robot's workplace one year, and the fireplace was a horrid stained modern thing that was too big for the chimney breast and we'd always planned to replace anyway, so none of it was a big loss. It could have been terrible. If the kittens had been beneath the collapsing shelf, they'd have been killed. I was amazed and relieved that the China foo dogs, which my husband bought as a boy, and the Victorian vases we'd inherited from his mum, somehow survived unscathed. But now we need another fireplace. Ah well. We'll have fun looking for a reclaimed Victorian one. Maybe we'll get round to having the chimney repointed when we get everything done, and then we can have a real fire one day.
Anyway, we're all ready for Christmas now. The gammon (we're having that rather than turkey) is ordered, I've made a stollen, and I'm going to come up with a special trifle recipe this year - I plan to make a cherry bakewell trifle. If it works, I'll stick the recipe up on Greedybots. All is well in the House of Robots, and I hope things are going pleasingly for you too.
Labels: clothing homewares