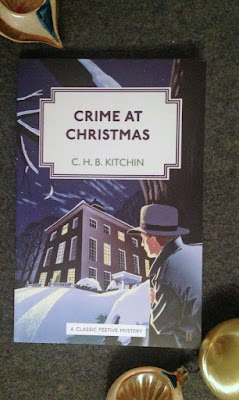 Ho ho ho! Don't let your relatives drive you to murder this holiday season; read this instead.

CHB Kitchin was an unfamiliar name to me, but I very much enjoyed this mid-1930s Christmas crime novel, which for once is not from the British Library series. Like the two I reviewed last year (The Santa Klaus Murder and Mystery in White) it's a story of people compelled by politeness and seasonal circumstance to spend Christmas together, which I suppose is most people's Christmas, with or without corpses. In this case, stockbroker Malcolm Warren goes to stay with his biggest client, the unidentifiably foreign Mr Quisberg, his motherly Irish wife and her three grown-up children by earlier marriages. The peroxide blonde elder daughter has a beefy idiot of a tea planter for a boyfriend visiting, the little male secretary has his mother staying, and Mr Quisberg's friend Doctor Green is the final guest. You don't see a fourth child, who is a child recovering from appendicitis, but there is an astonishingly pretty nurse. Astonishingly pretty nurses never bode well. And, indeed, before the turkey is served there's a death in the house.

On the whole this is a conventional novel, though there is a bit of a twist at the end where Warren has a question and answer session with 'the reader', wrapping up what happened after the tale's denouement. We don't often get to hear what happened next in the lives of characters in murder mysteries, so this was an interesting, if bizarre, touch that tells you how people's lives panned out in the following months. The characters are more interesting than in many crime novels. Warren, in particular, with his intuition and bouts of nerves, is an unusual narrator.

The thing that most interested me was its depiction of hospitality among the wealthy. It's something I've often thought about, because the way it's presented in Edwardian to 1930s novels is so very different to what I, a modern, working class woman, am used to. There's something beguiling about the notion of inviting people to stay but being under no obligation to entertain them, or of being a guest but essentially treating your friend's house like a superior hotel, where you are obliged to show up for meals and be sociable after dinner but otherwise can walk, read, and do what you like during the day. The closest people I know come to that sort of thing is hiring a large house for group holidays. (If I ever win the lottery, I'll rent the whole of Burgh Island - you'll come and join me, won't you?) However, I suppose if you've got a large house you might as well get some use out of it, and back in the 1930s when travelling around the UK might have been more difficult and communication between friends was more likely to be via letter than the telephone, it made sense to give people who liked one another a chance to spend time in each other's company without pressure to do anything in particular.

Another little detail I found entertaining was Warren's distaste for Mrs Quisberg's Edwardian furniture – I suppose by the mid-1930s such things would have been as passé as an overtly 1990s room would be now. Different enough to look dated, but not old enough to look classic.

Anyway, this is a decent read, and one that would make a fun addition to anyone's pile of presents. On which note, I really can't decide whether to put my tree up this weekend. I usually do it a fortnight before Christmas, but I feel as though an injection of festive spirit is needed, but can I really put up with the kittens pulling it over for the next three weeks? Decisions, decisions...
Labels: 1930s books Christmas crime