Save us, Agent Carter! 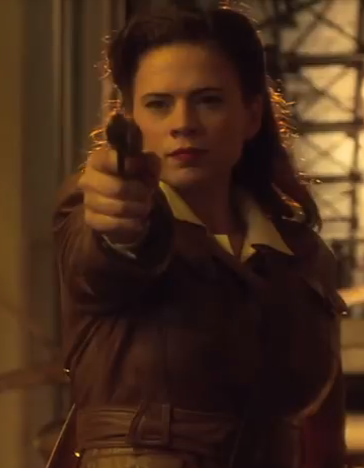 It may shock you to discover that I watch telly sometimes… Okay, it's no shock, I'm an unrepentant square eyes. I luffs my telly and radio. One thing I will not be watching, however, is Agent Carter. Why? Because no UK broadcaster is showing it! It's annoying enough when stuff gets snapped up by Sky Atlantic, which I can't get via cable, but I just have to tell myself that I pays my money, I takes my choice there. (And my excellent friend Kai sends me Game of Thrones on DVD for my birthday each year so I don't miss out.) That NO British broadcaster has seen fit to pick up the series is just bizarre. I'm not sure why no British channel has picked up this series. Perhaps they think people who watch period shows won't like superhero storylines, or people who like superhero shows won't want to watch one with a female lead (especially one not in lycra). Well, they're wrong. It's already a big hit in the US, so it could be here too.


Channel 4, which shows Agents of Shield, would be the logical channel to broadcast it. Personally I'd like to see it on the BBC, because then it'd be advert-free. It'd slot quite nicely into Saturday evenings – it's not as though they're overburdened with SF/fantasy programmes, despite all the Who-ha every time the Doctor pops up again.


Ahem! Back to Agent Carter. If you're not into comic book things, you're probably horribly confused. Here's what you need to know:

The titular Agent Carter is female – you might remember her from Captain America: The First Avenger.

And the costumes are just gooooorgeous. I'd watch it for those alone. ABC, which makes the show, has recognised this and has dedicated a page on its website to the fashions of Agent Carter, with input from the costume designer Giovanna Ottobre-Melton. It's really interesting, as she is very serious about accuracy, and does use some authentic vintage garments, but the action-packed nature of the storylines mean a lot of the costumes have to be made from scratch as they need multiple copies of each piece. Let's face it, no-one needs an armpit tear during filming! It's fascinating seeing and reading about her fabric and style choices.

I'm hoping Agent Carter's success has a knock-on effect in the same way Mad Men did, briefly. People loved the late 50s/early 60s styles in the early series of Mad Men, leading to a slew of articles on getting the look and High Street stores getting in on the act. It'd be great to see a revival of 1940s style. (On which note, Liz Tregenza's latest book is ALL about getting the 1940s look.) I've been feeling lately as though 'vintage' nowadays is getting less and less about actual old stuff or any sort of authenticity, and as pretty as the poofy-dress-and-victory-rolls combo is, it's become ubiquitous and isn't from any period I could name. It's absurd to get to the point where you (okay, I) can rock up at an event and feel out of place in actual vintage.

Agent Carter, if you can reboot vintage fashion, you really will be my superhero!
Labels: 1940s comics heroes television