A Game of Battleships / End of Empires, Toby Frost [books] 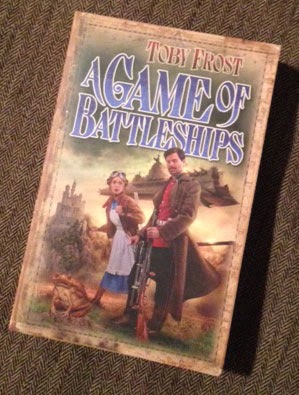 The first of the two Space Captain Smith books I got for Christmas, A Game of Battleships sees the mayhem-prone crew of the John Pym taking on the combined forces of the Ghasts, Edenites and Yull in space. The fanatically religious Edenites have got hold of a Dodgson drive, and are using it to make their spaceship appear and disappear, Cheshire-Cat-like, making sneak attacks on the British Space Empire all too possible. The Empire, meanwhile, is holding a treaty conference, seeking to ally with the small, pink, hooting Khlangari. (Fans of bygone British kids' telly may well laugh at that, and at the pink-striped 'Baghparsian feline' that appears). The usual mashup of references to British pop culture and SF icons is present, with everything from Dune to Elite to Iain Banks' Culture novels to the Flying Spaghetti Monster touched on.

Despite Smith, Rhianna, Suruk and Carveth having to venture to the planet of Europe for repairs before masquerading as pirates, the introduction of 40-something jolly-lacrosse-sticks nymphomaniac Captain Fitzroy (“The best girl in the fleet”) and the aforementioned Khlangari, I wasn't as keen on this book as I had been on the second and third in the series – it's probably on a par with the first, which isn't bad but isn't as hilarious as its sequels. That said, I groaned out loud at one joke Frost completely sneaked past me until the punchline hit me, and was was delighted to see C'Neth, the Willo-the-Wisp-like Vorl, had acquired a friend. I don't want to spoil it for you; let's just say Kenneth Williams fans will think it's dolly and leave it at that. 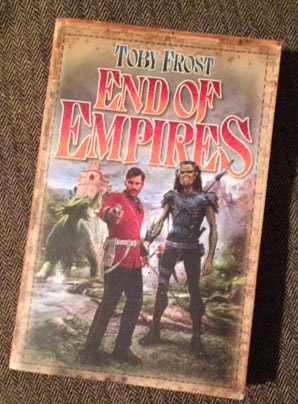 I really enjoyed End of Empires, on the other hand. There's a gentle critique of 19th-century British attitudes – and perhaps the modern tendency to overlook the worst aspects of those – as the Yull attempt to stir up a rebellion on the planet Ravnavar, a M'Lak planet that's now part of the British Space Empire, leading to the John Pym's crew having to travel to a jungle planet to uncover the relics of a M'Lak hero before the Yull can exploit them, trying to recover Major Wainscott, who's gone crazy upriver, on the way. Suruk learns martial arts from the last of a long line of M'Lak masters in a ruined temple, while pony-loving Polly finally gets pushed too far... If you ever wondered what a mashup of My Little Pony and Apocalypse Now would read like, here's your answer. Stir in some parodies of the Lord of the Rings films, kung-fu movies and inter-war socialism, and stand well back.

I think the problem with A Game of Battleships is the satire is aimed at too wide a range of targets in succession, and as a straight adventure it wasn't exciting enough. Perhaps more drawing on Lewis Carroll's novels across the whole volume would have made it feel tighter, because I did keep hoping for more Alice analogies but they didn't seem to pop up nearly enough. It does all hang together, it just feels rather rambly, like a series of episodes rather than a complete story, and some areas, such as the planet Europe, feel like wasted opportunities. (Honestly, you could have months of entertainment poking fun at Brits abroad.) Perhaps Battleships would be best read on a daily commute, so you can take in each incident separately. End of Empires has a much stronger plot, with more solid-feeling locations, and benefits greatly from that. It's much easier to sink into for a long, satisfying reading session.

We are promised more adventures in the Smith series, and I am certainly looking forward to those!
Labels: books derring-do retro-future science fiction steampunk