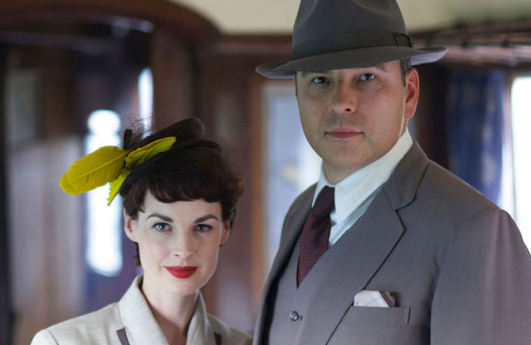 I completely missed the start of the second season of Musketeers (though this season has no Peter Capaldi, which decreases the crumpet content somewhat), but can tell you the BBC has made a new version of Agatha Christie's 'Partners in Crime' stories about Tommy and Tuppence Beresford. I always enjoyed those stories, and wondered why more hadn't been done with them. The early 80s versions with Francesca Annis and James Warwick have dated really badly, it has to be said. David Walliams and Jessica Raine are the leads this time round.

The BBC press release is intriguing as it states that the two stories, each done over three episodes, are The Secret Adversary and N or M, both set in the 1950s in a Cold War setting. Why intriguing? Well, Tommy and Tuppence age over the course of the stories Christie wrote. The Secret Adversary was written and set in the 1920s, when the pair were bright young things, while N or M was a wartime story featuring the couple a bit older. By the time Christie wrote Postern of Fate, the pair were pensioners. When I heard about the series, I did wonder how the BBC would handle the ageing, but it looks like they've decided not to go with that. As both the novels that have been adapted are thrillers, the Cold War setting could work really well.

The Cold War seems to be the new In Thing on telly. (Maybe there's a costume glut somewhere...) The latest series of Foyle's War has a Cold War setting, as did the last series, and I'm really enjoying it. Like The Bletchley Circle, it also touches on the way living through the war and the subsequent rebuilding changed society within Britain, leading to a growing demand for equal rights for women, as well as on the crimes being investigated within each episode, and I really enjoyed the latest episode. (Though Sam seems to have exactly the same problems communicating with her husband as BC's Susan. Just talk to them, you dolts!) I always do like a good spy thriller - by which I don't mean whizz-bang idiocy like Spooks, though that was entertainingly silly.

Did you watch Foyle's War? And do you think you'll give Tommy and Tuppence a whirl?
Labels: 1950s spy television