What I'm not knitting


Gemma did a great post on Retro Chick last week on the Five Guilts of Christmas. I don't think I'm likely to provoke many feelings of guilt in others, apart from on the food front. I don't do it to be virtuous, however, I do just like cooking and eating, and I enjoy sharing it. I certainly don't expect you to do it! Every year we get together with some friends and have a real feast (Blorpfest), so if you want to see what we've been making, keep an eye on Greedybots. We've got something very special planned for 2014... 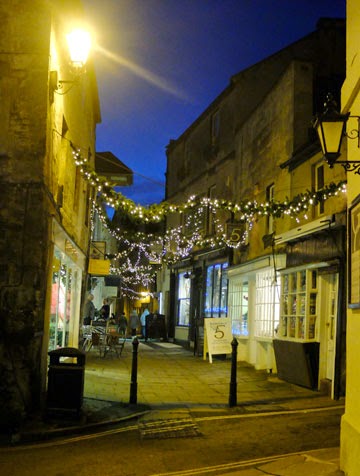 Last weekend I nipped to Bradford-on-Avon, a pretty town just down the road from Trowbridge. In many ways it and Trow are polar opposites: Bradford is quaint and upmarket, Trow decidedly more working class and, despite having more listed buildings than Bradford, more modern in feel. Trowbridge feels more multicultural. And Bradford is the home of the controversial Christmas tree! I did find the Christmas tree controversy funny; I saw it before it was toned down and it was entertainingly exuberant, but I could just imagine the posh pearl-clutchers wailing, "But we wanted Cath Kidston paper chains!" (Of course, in Trow, if we had a tree no-one liked, someone would set fire to it. Or if we had a tree we did like, someone would set fire to that. That's Trow for you.)


That said, both are mill towns and both have some excellent independent shops. Trowbridge has a fantastic butcher, Bradford an indie wine merchant. And Bradford has Jumblejelly, my friend Elle's brilliant yarn shop. I'd shop at Jumblejelly even if she weren't my friend because Elle's a hardcore knitter and therefore manages to keep yarns that are both affordable and good quality in stock, such as King Cole's Merino Blend range, and a lot of Wendy. (Wendy make fantastic yarns, but the photos on their patterns would make any photographer cry. I really don't know how they can style things to look so bad!)

Anyway, enough about Wiltshire towns – I promised to tell you what I'm not knitting. I was trying to make one Christmas gift, but have accepted that it simply wouldn't be finished in time. My mum is hard to buy for, as she has all the knicknacks she could want, and I don't want to bore her by giving her perfume or jewellery every year. She does love hand-knitted socks, so I'd started a pair (the pattern is Earl Grey), but have had to be realistic about the timing. I've bought her a different gift, and will send her these socks when they're done. That might be before Christmas, but if it isn't, I don't have to worry. Despite the fact that I won't have them finished in time to post, I am definitely enjoying knitting these socks and will carry on plugging away. The pattern is easy enough to be fairly quick, but the cable design down the side of the leg and instep adds interest. The yarn I'm using is Lang Yarns Jawoll, currently my favourite sock yarn. It knits and wears really well, yet is also very soft. The colour is Bakelite Green.