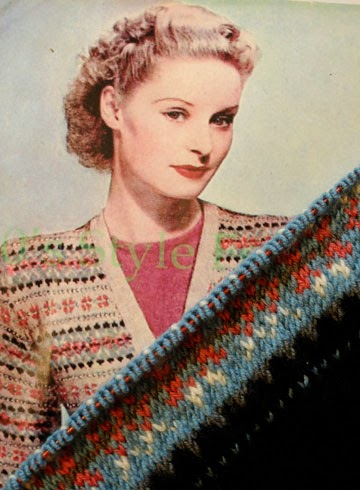 As it's been a while since I shared some knitting with you, I thought I'd show you what I've been making. I'm trying to use up more of my yarn stash in order to make room for a sewing machine, and that has meant finding projects that make the most of the yarns I already own. I bought a bag of black 4ply ages ago, then realised that since letting my hair return to its natural colour, pure black is not my friend, and knitting with black 4ply is also deadly to the eyes. I decided to use the black as the base colour for a fair isle knit, as 10 balls of that plus some other colours would be enough to make a versatile cardigan.

But which pattern to use? After a good rummage, both online and in my collection, I plumped for Bestway 1491, a 1940s V-neck cardigan. The pattern is free to download from 1940s Style For You (you can possibly make out the watermark on the pattern picture in my photos). The all-over pattern was important; you can find designs with fair isle at the top only, or just around the waist. However, I feel that yoked designs aren't flattering to me (big busts sit lower, and can look like they've slipped under the yoke), and drawing focus to the waist is a massive no-no too. A pattern that goes from shoulder to waist, with a nice V-neck, is perfect.

The original pattern was knitted in five parts: left front, right front, back and two sleeves. I decided to knit the fronts and back as one big piece, then divide for the armholes, as this would speed things up and reduce the number of ends needing to be woven in at the end. Find me a knitter who likes weaving in ends! Go on, try – you might find the occasional oddball like me who enjoys sewing seams, but you won't find anyone who delights in weaving in ends. Increasing the size was also necessary. This was the trickiest project I've resized yet, as I had to work out how many stitches the repeats work over. In the end, as the pattern was multiples of 20, plus one extra, I increased the back by 18 sts and the fronts by 10 each. If you're thinking, 'But that's two stitches short', that's because I had to lose two stitches when I turned three pieces into one. Ah, knitting. So simple, eh? 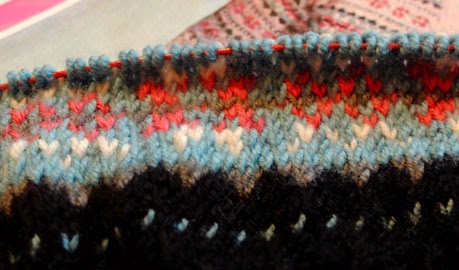 The white and teal yarns are also from my stash – they're crisp colours that looked good with the black. I could have used the same mid-blue as I used for my Madeira jumper, but thought it'd start to look a bit weird if I wore the same blue in too many knits and opted for teal instead. I bought the raspberry pink and dark grey specifically for this project, as I didn't have any other colours that contrasted strongly enough with those to work in the pattern, but an extra couple of balls is worth it to reduce the stash by ten. It really is raspberry pink, by the way, I just can't seem to take a picture that captures the colour properly. The shades aren't authentic 1940s ones but they do look nice together.

Now I've got a few inches in to the colourwork, I'm not sure how I feel about it. I'm not convinced by the areas where the pink and teal are side-by-side. Ironically, that's the part that's closest to the original pattern as those areas were red and blue in the original! It's not the contrast between the pink and teal that bugs me, it's the transition from white to pink, and whether the contrast is so sharp you lose the shape of the motif. Hmm. HMMMMM! But lots of people seem to love the colours and I'm too lazy to rip it back and replace either the raspberry or white with a pale pink, so I shall keep knitting and see how it looks. If I really hate it after six more inches, I can rip it back. (If this doesn't teach me to swatch before starting, or at least get out my colouring pencils and mock up motif colourways, nothing will!)

Previously on Crinolinerobot…
Knits I've blogged and completed include a 1940s slip stitch jumper (Theodora has just put the pattern on her website), a textured navy cardi designed in the late 40s/early 50s by James Norbury, and a Wartime Farm sleeveless pullover (pattern from Susan Crawford) for my husband. Or you could just click on the 'knitting' tab in the right-hand sidebar to see my woolly adventures.
Labels: 1940s knitting