Is there Life on Mars?

Over the past couple of weeks I’ve been rewatching Life on Mars. (The UK version, I should point out, not the US remake.) I’ve been a tad blue at times, and there’s something very comforting about it - perhaps it’s the fact that things always work out right in the end.

In case you somehow managed to miss it, here’s a spoiler-free synopsis: Detective Sam Tyler has an accident in the late noughties and wakes up in 1973. All the policemen around him are convinced he’s on secondment to them from a place called Hyde, and that he should be there. Being from the 2000s, Sam finds a lot of the methods and attitudes of the time hard to deal with, especially as his boss, Gene Hunt, frequently seems to embrace them. Sam’s not sure if he’s crazy, if he’s travelled in time, or if he’s actually in a coma, as he’s occasionally able to hear the sounds of a hospital above the noises around him, but that might not be real either. All he can do is keep solving the crimes that come his way and hope to work out how he’ll return to his own time – at the same time coming to feel part of the team and growing close to a female officer, Annie. 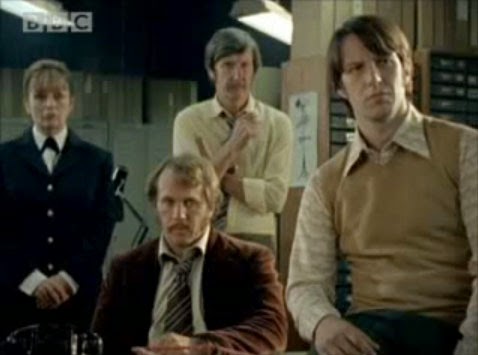 The first time I watched the programme my focus was on the narrative, but seeing it again I’m also able to pay more attention to the craft, and how hard the makers have worked to create 1970s Manchester. There are mill buildings, and red brick streets, many of which were being demolished in the midcentury to make room for tower blocks. City centres up and down Britain have been rebuilt over the past 40 years, so it’s great that the film makers have been able to find enough believable locations. Of course, the programme is a fantasy of the 1970s rather than the actual 1970s, and some elements of the design reflect that. Real offices would have had proper ceilings, for example, and the darkly Brutalist police offices with their industrial, preformed concrete ceilings reflect Sam’s state of mind and the attitudes of the people around him, they’re not part of an accurately recreated police station.

Being a child of the 70s - I was born in 1974 - I don’t remember masses about the decade as I was very young then, but some things in the show are still familiar.* My very favourite bit from both series is the episode that opens with a pastiche of the opening credits from children’s programme Camberwick Green (perhaps because I watched it as a child). Instead of the usual Camberwick Green character rising out of the music box, there’s a model of Sam Tyler. Then, joy of joys, you get to see a little Camberwick Green version of his crude, brutal yet fundamentally good, boss, Gene (erm, kicking in a nonce. This would be one of the methods of the time Sam has trouble with).

I have a Woman’s Weekly pattern for knitted Trumpton figures from years ago, and as Camberwick Green, Chigley and Trumpton were all made in the same style, I reckon I can adapt the patterns to make myself a cuddly Gene Hunt. Gene is my favourite character because you sense underneath it all he could be a really good guy - he just needs Sam's help to get there. And in the mean time, he's a drinking, sweary, reckless-driving delight.

If you missed Life on Mars, I highly recommend it. It - and I’m including the followup showAshes To Ashes, which was set in the 1980s, in this - is one of the best programmes on British telly in recent years. And the soundtrack is excellent...

*Papa Robot was in the Air Force, so I spent my pre-school years in the Netherlands and Germany - now when I visit the Netherlands, I get a really weird ‘time slip’ feeling and feel like I’ve fallen back in time to then. A touch of the Sam Tylers, if you like.
Labels: 1970s crime television