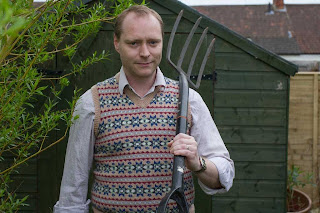 Tasha from By Gum, By Golly has launched 'Knit For Victory', a 1940s-inspired knitalong. All you have to do is knit something 1940s (or 40s-inspired) between now and January 31st 2014. I don't often join in knitalongs as they usually involve making something I don't fancy making or come up when I'm halfway through another, urgent project. However, half-finished large knits are okay for the knitalong, so I'm using it to give me the impetus to finish my navy cardigan.

I'd been feeling a little bad about how long it's taken me to knit the navy cardigan, which I started last year (July 16 2012, according to my project list on Ravelry – I'm idontlikecricket if you're on Ravelry too). However, looking at that same project list made me realise how many things I have completed since then, including swap box projects (two shawls!), Mr Robot's Wartime Farm tank top, and the gorgeous 1950s cardigan my friend Sarah wore to get married in. Not completing the cardigan hasn't been a sign of slacking, it's a sign that perhaps I need to spend a few months being a selfish knitter and making things for myself.

I'm hoping to finish the cardigan and then knit myself something else. I have a pack of black 4ply, so was thinking of It Cannot Fail To Please from A Stitch in Time vol 1 in black. However, I also have a load of silk/cotton blend in grey with a silver thread running through it, which I'd originally bought to knit a jacket but now fancy using for Lamour by Sarah Hatton – I reckon in that yarn it will look pleasingly dieselpunk. I guess I'll have to wait and see what mood I'm in when I've finished the navy cardi!
Labels: knitting