Bill Bryson at the Forum Cinema

Yesterday Mr Robot and I went to see Bill Bryson give a talk, arranged by Topping and Company booksellers. He's got a new book out, One Summer: America 1927. As you'd guess from the title, it's all about the summer of 1927 in the United States. We both love Bryson's work, I'm fascinated by the 1920s, and the talk was being held in the art deco Forum cinema – what better place for it? The cinema is now owned by a church, but it hosts other events from time to time, and Toppings runs a good range of events throughout the year, so I check their website frequently and snap tickets up if something looks interesting.

(Sorry the photo of Bill Bryson is so ropy - I snatched a few shots just as he came on, then put my camera away so I could enjoy the talk and wouldn't disturb other people.) 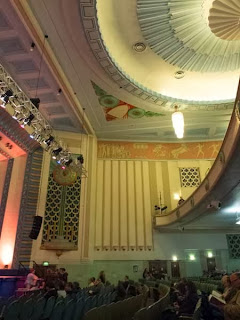 Mr Bryson read one excerpt from One Summer, plus some from his other books (including the memoir of his midwestern 1950s childhood, The Life and Times of the Thunderbolt Kid). He explained that when he started researching his latest book, his plan had been to write about baseball player Babe Ruth and aviator Charles Lindbergh, both of whom had performed amazing feats that summer. Lindbergh had become the first man to cross the Atlantic from New York to Paris in a single flight (in the process becoming the most famous man on Earth), and Babe Ruth hit 60 home runs in a single season. However, he quickly realised just how pivotal that summer was for America, with the great Mississippi flood, the start of the Mount Rushmore carving project, The Jazz Singer being released in cinemas and so many more things happening, and so the book widened in scope, though Lindbergh remained a major part of it.

I'll write a full review of the book when I've read it. 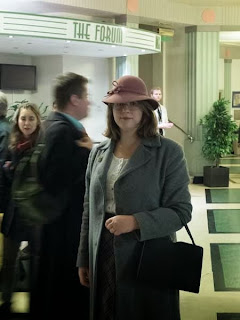 To suit the event and location I tried to dress with a nod to the 20s, in a felt hat and straight coat, plus straight pink/grey tartan skirt and hip-length cardigan, but I don't think it worked, really. If anything the hats has too large a brim and the skirt was too long (and the 1960s bag didn't help). Ah well|!
Labels: 1920s Bath books events