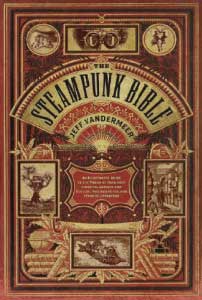 There are a few books around about Steampunk as a genre, and most of them are very well done. The Steampunk Bible by Jeff Vandermeer with S J Chambers is among the best.

I think the key to what's made the current crop of what-is-steampunk books so good is the fact that most have been written by people who are already part of the subculture in some way. Back in my goth days, I used to get very annoyed by people who tried to foist an idea of what the subculture was on us from the outside; steampunk doesn't seem to have that problem at the moment. Vandermeer and Chambers are already writers within the genre, and it shows. They've spoken to some of the biggest names in steampunk for their book, including Jake von Slatt, Datamancer, Jema Hewitt (Emilly Ladybird) and Scott Westerfield.

Chapters in The Steampunk Bible cover such topics as the origins of steampunk, Makers and Artists (and there is a difference!), fashion and music.

As someone who's primarily interested in books and films, I didn't enjoy this book as much as Steampunk: The Illustrated history of Fantastical Fiction, Fanciful Film and Other Victorian Visions by Brian J Robb with James P Blaylock and Jonathan Clements. (I reviewed that one for SFX, which is why I haven't done it on this blog.) Robb's book delves deeper into the fictional side of steampunk, looking closely into the precursors of the genre, and seems to go further into exploring modern steampunk fiction in all its forms (television, film, books and so on). I did feel there were things missing from The Steampunk Bible, especially in the chapters on Artists/Makers and music, where some very well-known names never got mentioned – perhaps this is because many of the things I felt were missed are European, and the writers of this book are American, and while they've tried to take an international approach, inevitably they will talk about the things and people they know best.

However, The Steampunk Bible does have one massive advantage over Robb's book, and that's the way it's stuffed with photos of real steampunks. If you've ever had a hankering to go to a steampunk event, this will give you the inspiration you need, plus a thorough grounding in all the most important aspects of the subculture so you won't feel hopelessly lost when you get there.

My copy of The Steampunk Bible was a gift from my little brother, and a very welcome one it was too!
Labels: books steampunk