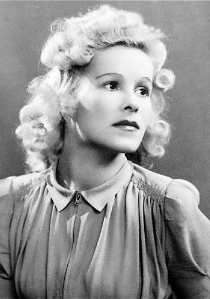 How can a bombshell be forgotten? Often it’s because of the medium they work in. Bombshells are visual beings, and stage work and a lot of television can be hugely popular when it’s broadcast, but never repeated, and so the beauties live on only in the reminiscences of others. For example, Sabrina, another of my Forgotten Bombshells, worked mainly in television in light entertainment programmes that haven’t been repeated in years, so today’s audiences will only come across her in her brief Blue Murder at St Trinian’s cameo or the Goon Show’s oaths such as ‘By the sweaters of Sabrina!’

Chrystabel Leighton-Porter’s work is even less likely to be seen by the modern mainstream as she appeared in artwork, not photos or film: she was the main model for popular 1932-1959 Daily Mirror comic strip 'Jane'.

Depending on your age, you might just remember Jane as in the 1980s there was a Jane TV series starring Glynis Barber (Soolin from Blake's 7!), the Mirror briefly revived the strip, and a really quite dreadful film, Jane and the Lost City, was made. However, Jane was first and foremost a comic strip character. She got into all sorts of scrapes, most of which ended up with Jane in her pants. Initially cartoonist Norman Pett’s wife Mary modelled for Jane, but in 1940 Chrystabel took over the posing job.

Jane carried on losing her clothing on a regular basis throughout the Second World War, where she often came to blows with German temptress Lola Pagola. She was a popular pin-up with British troops, and the noteworthy episode where she ended up nude was credited with boosting morale and driving troops on. Submarine captains received advance copies of the cartoon so their sailors wouldn't miss out. Chrystabel received sackloads of fanmail and proposals of marriage. During and after the war, she toured with a Jane-themed act (naked women weren't allowed to perform on stage, so various ways to get around that had to be found, including drawing a motionless Chrystabel round it in a sledge!). In 1949 Chrystabel made a film, The Adventures of Jane.

The comic strip ended with Jane marrying her boyfriend Georgie Porgie. Chrystabel met and married a dashing Air Force pilot during the war, and the two were together for the rest of their lives, so while our bombshell is now forgotten, she too had a very happy ending to her story.
Labels: 1940s forgotten bombshells