What I bought at Steamcheese 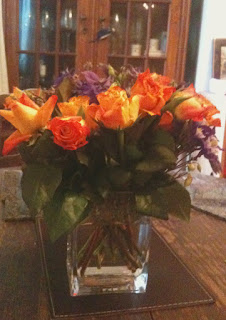 I've got a proper post with outfits and other lovely stuff from Steamcheese planned (proper photos of that, too), but in the meantime here are some things I bought at the market there. I love shopping at this sort of event as it's a chance to buy things you simply can't get in conventional shops.

First, a vase engraved with nautiluses from Atelier Fabry-Perot. It's hard to get a decent shot of the nautiluses on my cameraphone, but hopefully you can see these. I'd seen photos of the vases online before the event and was determined to get one of them. The nautiluses remind me of fossils, which it why I wanted one. I love fossils and there just aren't enough things with fossils on for me to buy! Hopefully any leftover vases will be appearing on their Etsy shop over the next few days. They also had all sorts of wooden laster-cut items for sale; I think they actually sold out of their rocket ship kits.

Some vintage buttons and a buckle from Mr and Mrs Magpie's Inexplicable Emporium. I have no idea what I'm going to put them on, let alone when I'll have time to knit it, but I had to have them! I've actually got 12 of the blue ones, so can use them on a 30s pattern as those often use a lot of buttons. And yes, it's sitting on top of the Wartime Farm tank top. It's finished! It's finally finished! *Cries with relief*

Mr Robot bought a bakewell tart-scented candle from the Magpies too, as his mum really likes scented candles and this was something a bit different.

Those two companies are both run by friends of mine, but I paid full price for my items. Steampunk's a small community, so getting to know people who sell things is inevitable.

We also bought a couple of things from the band stalls in the evening - I had to have the latest Professor Elemental comic, and Mr Robot enjoyed Sunday Driver's set and so bought a CD. I'll do you a proper review of the CD, and a comics roundup, at some point soon.
Labels: shopping steampunk