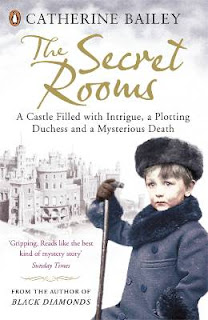 The Secret Rooms by Catherine Bailey is one of those books that I really didn't want to put down when I started reading it. I bought the book on a whim; I was in Toppings in Bath looking for presents for Mr Robot's birthday, and spotted this lying out on one of the display tables. The subtitle 'A castle filled with intrigue, a plotting duchess and a mysterious death' was too good to resist.

Catherine Bailey is a television producer with an academic background in history. She went to Belvoir Castle (not to non-Brits: it's pronounced Beaver, one of those odd Norman-French things!) to research the history of the men who lived on the Belvoir Estate – the servants from the castle, the farmhands and other ordinary men who'd mostly never even left that part of England before – who went off to fight in the First World War. The eighth Duke was awarded the Order of the Garter for raising recruits, and his son John, later the ninth Duke, was an officer in the North Midlands Regiment.

The Dukes of Rutland have an unparallelled archive of family correspondence at the castle, all carefully organised by John into bound volumes. However, on gaining access to the collection letters, Bailey realised first what a rare thing it was, as many of the staff commented that no-one was even allowed into the rooms where the bound books of letters and estate accounts were kept, and then she discovered, on looking at the letters, that a large chunk of the records had been excised. Everything covering the period from the 5th of July to the 5th of December 1915, the 152 days when the North Midlands regiment had suffered the most appalling casualties, was gone.

Bailey is not a lady to be deterred. She looked through every volume of letters, in case something had gone astray, and in the end found three gaps in the records, all from the lifetime of the ninth Duke. He'd been labouring in the rooms where the records were stored literally up until his death; what was he trying to hide? Whether you will find the book compelling depends on your love of mystery, and you may find tales of rooting through records, visiting other stately homes and archives, dull, but I loved it. Bailey has the knack of compressing months of usually fruitless research into a wonderful narrative of discovery.

I won't spoil things for you by revealing Bailey's discoveries, but I will say what she found was someone my heart really went out to at first. The ninth Duke seems to have had an especially loveless childhood, and there were points when I wished I could reach back down the years and give a lonely little boy a cuddle. His parents, as they are portrayed in the book, seem capable of loving their children only when they are dead or at risk of dying, whereas alive and safe they are neglected, mistreated – in one case, virtually pimped out. And the possible reason behind the missing wartime letters makes me feel more ambivalent, as John's apparent behaviour is something no-one could praise, but I do not know if I could be brave, and so will not condemn another's actions in a situation I cannot imagine. Part of me thinks after such a loveless early life, it's understandable if a person is prepared to sacrifice even his honour for affection.

The book ends with a list of the names of all the men from the estate who died in the war. Their stories may have been erased, but Bailey is keen to ensure their names will not be.
Labels: 1910s books WWI