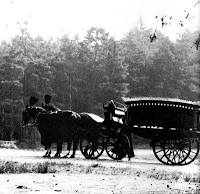 Today special effects genius Ray Harryhausen passed away. Influenced by stop-motion animations that he'd seen as a boy, especially in King Kong and The Lost World, he was one of the foremost special effects creators ever to work in film. What films he made! Jason and the Argonauts, Earth Vs the Flying Saucers, One Million Years BC...

I watched one of Harryhausen's films only last week. It was 20 Million Miles to Earth. (The title is misleading; it's set in Italy.) While the irritatingly macho hero was very much of the era, and you could tell the scientists were going to make a terrible mistake, the monster, which was Harryhausen's work, was brilliant, and the scenes where the US military battle it round central Rome are an incredibly skillful blend of stop-motion miniature with real filmed footage. I doubt many of today's special effects will look as good in fifty years' time. As I say, he was a genius.
Labels: film horror RIP science fiction