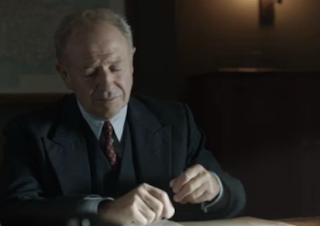 I was really pleased to see the new series of Foyle's War on ITV last weekend. It's been one of my favourite TV series for some time: a fair bit of cosiness and nostalgia, but not shying away from the dodgier things going on on the Home Front, from illegal distilling to dodging the petrol rationing, right up to sabotage and spying. I'd wondered how the programme could continue with the end of the war – well, it looks like Foyle is entering the Cold War.

I like a good spy story (there's even a Spy tag in my tagcloud), so I was keen to see how it would be handled by the makers of the show. In the past, Foyle's War had been more of a crime drama, usually involving murders. There's scope for drama in espionage, as John Buchan's Richard Hannay stories and the novels of Eric Ambler show, but I really hoped things wouldn't descend into Spooks-style whizzbangery. (Spooks doesn't take my award for Worst Spy Programme Ever; that still goes to the unspeakably awful Undercovers.) As it was, they kept things nicely paced, and didn't overdo the scenes of tension nor the violence.

What's more, the programme makers continued to dig at the less comfortable aspects of life: the soldier returning from being a POW in the Far East has trouble relating to his family and can't find work, while Sam, once Foyle's driver, is shown as having to balance her own work with society's expectations that she exist to support her husband in his political career. It's quite weird seeing Sam out of uniform; she has some very nice outfits, including a fab embroidered cardigan. Rationing is still going on, and large areas of London are still bombed out, awaiting rebuilding. (Actually, the London setting was one of the few things that disappointed me as I'd loved the Hastings setting for the earlier series, but I appreciate that there was probably more related to the Cold War going on in the capital than on the coast; it's a necessary evil.)

There are only going to be two more episodes in this series, but I really enjoyed the first one, and am looking forward to the others. You can still catch up with the first episode of the new series of Foyle's War on ITV Player – I don't know if this link works outside the UK.
Labels: 1940s spy television