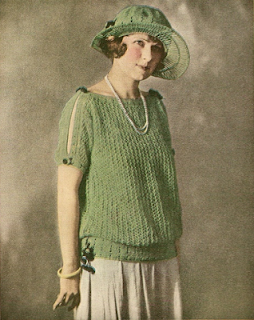 In a decade where the waist went south, knitwear was the exception as it was frequently belted at the waist in the later part of the 1920s. The important thing with 20s-style woollies is to make sure they’re hip-length – even though there was often a belt, the length of the knit meant there was a visual change at hip level.

Necklines were round, square and V-necks, and plain collars were common on square-neck jumpers and cardigans. Sleeves were usually drop-shouldered or set-in, and very simple in shape. There was little shaping to the body. This makes 1920s-style knits easy for beginners – and as long as the length is right and the fit not too tight, you can get the right look with modern knitwear too. To avoid a late 20th-century look, opt for boxy knits in fine, rather than chunky, yarns, and keep the sleeves straight and fairly narrow.

You see a lot of designs for crocheted tunics and jumpers from the first half of the 1920s. Some knitted garments also had crocheted embellishments. I bought some PDFs of 1920s patterns from eVintagePatterns on Etsy, and found it interesting that the hat and scarf sets consisted of crocheted hats and knitted scarves; clearly there wasn't the 'knitting versus crochet' attitude then that you see in some parts of the yarncrafts community nowadays. 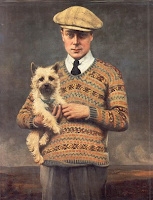 The big story in men's knitwear in the 1920s was, of course, Fair Isle. Edward, the Prince of Wales, was a massive trend-setter, and started appearing in public in Fair Isle tank tops (sleeveless pullovers) and jumpers very early in the decade. He even has his portrait painted wearing one. The result? Any man with any pretensions to style had to have one too. Chaps who desire the 1920s look, get thee a Fair Isle woolly!

Although I’ve yet to come across a pattern for one, you do see photos of amazing, geometrically patterned tops which could have been sewn or knitted. I reckon if you were to knit one of these, you’d need to be very careful not to end up with a 1980s look, geometrically-patterned jumpers being popular then. Use a fine yarn, not a DK or thicker, don’t put ribbing round the bottom hem, and look at 1920s textiles to be sure of getting the colour palette spot-on and it just might work.

Pattern sources and brilliant blogs
Vintage Purls is a good source of free 1920s-50s knitting patterns.
Bramcost Publications sell PDFs of vintage knitting and crochet patterns and other craft books.
Susan Crawford and Jane Waller's A Stitch in Time book 1 contains some nice 1920s patterns which have been reworked to include a wider range of sizes and use modern (but authentic-feeling) yarns; it's available as an e-book and pre-orders are being taken for another print run.
Some blogs which always inspire my own vintage knitting are The Vintage Knitter, Barbara Knits Again, Tickety Boo Tupney and Snoodlebug.

Oh, and if you want to find me on Ravelry, my username is idontlikecricket
Labels: 1920s clothing knitting