The 1950s had stiletto heels, the 1960s had go-go boots. The 1920s had shoes with Louis heels. I'm a particular fan of this style: it's usually a couple of inches high, broader at the top and bottom, and curves inwards in the middle. The wider areas spread your weight, so they're more comfortable than spindlier, higher heels. The style has its origins in the shoes worn by Louis XIV of France in the 17th century - everyone wanted to be like the King, so everyone at his court wore them, and the style was named after the King. how and why it became popular in the 1920s, I've no idea. 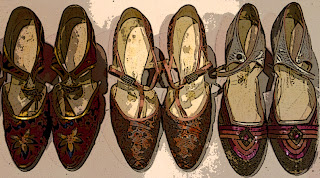 But the style was popular. The 1920s seems to have been a wonderful age for shoes: just as clothing became bold and exuberant, so too did footwear, and shoes had all manner of straps, buttons and patterns. Leather was most popular for daywear, but by night shoes could be as ornate and sparkly as the wearer desired... as long as they had that heel! Toes generally came to a rounded point, too: nothing babyishly round, but not squared-off or sharply pointed either.

I grizzled earlier this week about having trouble finding deco-style shoes. I knew a few styles, and had some suggestions for other good ones, so here they are!

Hotter Valetta
I've got a black pair of these for work. They're very comfy. I did have to have the sole re-glued, but to be fair, I walk for miles in these things. Annoyingly, they brought out Valetta last year and have reissued it this year, which is great if you want a pair, but annoying if you already own one. (You wait, they'll stop selling them, I'll wear mine out and then I'll moan for months...)

Neosens Rococo range
A few retailers here in the UK stock the Spanish brand Neosens, and their 'Rococo' and 'Croatina' ranges have the perfect heel. As you'd guess from the name, overall the Rococo range owes more to the  17th century than the 20th, but the shoes would work well as part of a deco outfit.

ReMix
ReMix were mentioned by Ellen. They do look lovely! I really like the Balboa style. However, the price does scare me. You may be more prepared to spend on shoes than I am, though.

Hush Puppies Freya
Claire mentioned Hush Puppies. These ones are really nice, and while not cheap, not eye-wateringly expensive either.

Personally, I think I'll get either a Neosens pair or the Hush Puppies this summer, although it'll have to wait a month or two as I was a bit naughty this week and ordered myself a Highgate check dress from Hobbs. I'd liked it when it first came out, the price has now dropped by £90 and I've had a tonne of work on, so I decided to treat myself. And now I'm thinking, "You bought a dry-clean-only polyester dress, you idiot!" I just hope the colours suit me...
Labels: 1920s accessories