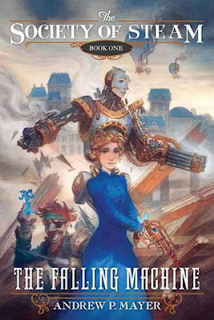 MOAR STEAMPUNK, I'm afraid. I've had more time to read for myself recently, and this is part of a backlog of steamy books I've acquired. I've mentioned that I review for SFX. Every so often they have an office clear-out, and the reviewers get the chance to take home some of the surplus books*. I won't bore you with details, but what it's boiled down to is a nice pile of steampunk novels that I haven't got round to until now.

Mr Robot did start reading this one, and told me that he "Put it down in disgust after 30 pages". I disagree with him, I enjoyed it, but it did strike me as a book more for female readers than male ones, and one that you could easily give to a 12-year-old just getting into steampunk. That it's suitable for younger readers isn't a criticism as such; some of the best fantasy/horror/SF books I've read this year have been aimed at young adults, possibly because the writers have had to concentrate on things like character and plot rather than sex and violence.

Steampunk is naturally quite pulpy, usually falling somewhere between Jules Verne, Edgar Wallace and Raymond Chandler. The more of it I read, the more I feel that the British-set SP tends to favour the lone adventurer, the man (usually) of action, whereas the US-set stuff often has a superhero slant. An Avenger, rather than a Alan Quatermain. What I liked about The Falling Machine was that the superheroes, The Paragons, already existed, and were getting older, losing their edge. Sarah Stanton, teenaged daughter of The Industrialist, sees her friend Dennis Darby, leader of the Paragons, get killed. As most of the Paragons each follow their own agendas, she and Darby's finest creation, Tom the Automaton, plus ageing English Paragon The Sleuth, try to find out who is the traitor within the group, the person who got Darby killed.

I really liked Sarah as a heroine. On a purely shallow level, it's nice to read a heroine thinking about how cumbersome her corsets and bustle are, and to see one getting plenty of scrapes and bruises. She's credible. She's an appealing character, without being written up as the usual cleavage-heaving kickboxing sexpot. (I am bored of those, frankly.) Her father may be The Industrialist, steaming top hat and all, but he's also a Victorian dad, leading to plenty of arguments. The Paragons have a wonderful headquarters, but within it they are people, still prey to rivalries and conflict.

My main criticism of the book is that it ends on too large a cliffhanger. It's written to be the first volume in the Society of Steam trilogy. However, it's one thing to leave loose ends for the next volume, but in the case the story was simply incomplete. It didn't have an ending, more a convenient stopping point between chapters, and that was annoying.

I don't know if I'd recommend this to adults, but I may well end up buying another copy to send to my elder goddaughter, because Sarah is a great heroine for teenaged girls to read about.

*I won't duplicate reviews I've done professionally on this blog, but SFX do put up some of my reviews on their blog. I reviewed The Iron Wyrm Affair by Lilith Saintcrow recently for them.
Labels: books steampunk