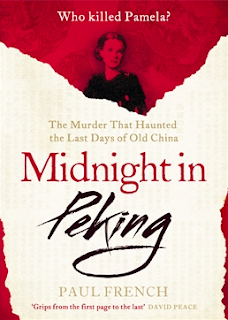 Peking*, January 1937, and the badly mutilated body of a young white girl, her heart removed, is found by a reputedly-haunted ancient tower. It sounds like a work of fiction. In a happier world it would be fiction, but on the 8th of January 1937 nineteen-year-old Pamela Werner was indeed found that way. Midnight in Peking explores the case.

I don't often read true crime stories. In fiction the horrible things never really happened, so I'll happily read about Miss Marple or Detective Carella or Bryant and May's investigations. True crime often leaves me disturbed for days, thinking over the person who was hurt. What attracted me to this one was the time and setting: China was in political turmoil, with the republican government under threat from both the Communists and the Japanese, who in 1937 were already at the edges of Peking. It was a country with greater, wider problems to face than the death of a schoolgirl. And I am in my own way a product of colonialism, with a mixed heritage. When Pamela was living in the strange, gilded cage of Europeans in Peking, I still had family in Burma, although my grandfather had left Asia by then. Those lingering bubbles of Empire fascinate me, things that could not last (and I do not wish had lasted), like little fantasy lands.

What happened to Pamela could have burst the Peking bubble. The colonial forces couldn't investigate in China, and the Chinese police couldn't investigate inside the foreign quarter. Colonel Han, Chief of the Morrison Street Detective Bureau, worked alongside an envoy, DCI Richard Dennis, to investigate the murders. And what French reveals is their efforts to find the truth constantly hampered by the need to save face. People living and working in the disreputable badlands, the district of brothels, nightclubs and dive bars between the foreign-controlled Legation Quarter and the Chinese street where the Werners lived, simply weren't co-operative. The British authorities ordered Dennis off parts of the investigation and, crucially, forbade him to have anything to do with Pamela's father after a certain point. Saving face was more important than showing Europeans in a bad light. Pamela's killer was never caught.

And yet Pamela's father kept on looking. He never cared about saving British face, and had clashed with the authorities numerous times, even when he worked for the British. He had nothing to lose by carrying on the investigation. As Europe slid into turmoil, and the situation in China worsened, even after the Japanese took control of Peking, Mr Werner kept searching for the truth. In his seventies at the time of her death, he was a renowned scholar, crucially fluent in many Chinese languages and familiar with local customs. He paid detectives, put things together, uncovered lies, and sent his evidence to the British authorities... who ignored it. Many decades after his death, though, his researches have come out, bringing as much justice as could be possible for Pamela.

A fascinating book, and one of those that will affect me for some time.

According to the official website, Midnight in Peking is being made into a mini-series for ITV. I'm guessing it will be similar to the one based on The Suspicions of Mr Whicher, which was adequate although nowhere near as interesting and engaging as the original book (another of the very few true crime ones I've read).


*French refers to the city as Peking in the past, and uses Beijing for the modern city.
Labels: 1930s books crime