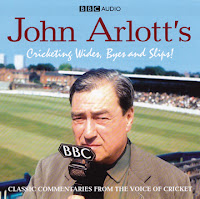 We're having a dismal summer this year, but the England cricket teams - men's and women's - are still having a decent season. Mr Robot went to see England versus Australia at Lord's on Friday, and as well as a Lord's lapel pin for me, he brought a couple of CDs for us both to listen to. (And spent about a tenner on a very average burger, and rather more on beer! Ah, cricket!)

Don't like cricket? Give the commentary a go anyway. I never liked cricket before getting together with Mr Robot, 18 years ago. Test Match Special got me hooked. Gents and the occasional lady and even a celeb or two from all cricketing nations discuss cakes, pigeons, buses, rain, and all sorts of oddities as well as giving a running commentary on the cricket. It doesn't matter if you have no idea where the balls are going. It is a wonderful stream of good manners and joviality.

John Arlott was the first of the BBC's famous cricket commentators. He started commentating in 1946, on the India tour of England. His commentary was very popular in India, and from 1946 to 1980 he covered every home test match. His voice isn't what the uninitiated might expect of a BBC broadcaster from the mid 20th century; far from the stereotypical cut glass BBC accent, he had a wonderful Hampshire burr that gives much of what he says a gentleness. He also had an incredible gift with words - he wrote poetry, and that talent comes through in his descriptions. John Arlott's Cricketing Wides, Byes and Slips focusses on some of the most noteworthy matches he commentated on. Aussie cricketing legend Don Bradman's final test in 1948, Jim Laker's astonishing 19-wicket haul in 1956 and even Geoffrey Boycott running out Derek Randall in 1977 (something Boycott is reminded of by the rest of the TMS commentary team every so often). And, of course, there is the 'freaker'; the naked man who got onto the pitch at Lords in 1975.

I really enjoy this CD. It's calm and has the warmth I love in the BBC's cricket commentary. It brings a bit of sunshine into our dull, wintry British summer. Definitely recommended.
Labels: 1940s 1950s 1960s 1970s 1980s cricket radio