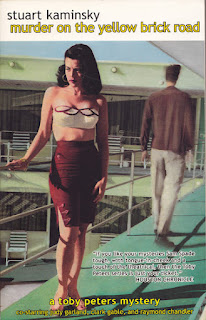 It's November 1940, and private investigator Toby Peters gets called to MGM by Judy Garland because someone has murdered one of the little people who played a Munchkin in The Wizard of Oz.

So begins Murder on the Yellow Brick Road, the second of Stuart Kaminsky's novels about Toby Peters. I don't have the first one, but this stands alone, possibly because it was written in the 1970s, long before the current popularity for serial novels that not only feature the same characters but tie in closely with each other. Kaminsky was a genuine lover of film, and he talks about that in the afterword to this book. (He lectured in Film Studies.) It comes out in the story too: he knows the history of The Wizard of Oz, and is generous towards the real-world characters who pop up in the narrative. Judy Garland is shown as uncertain, a little lost, but able to be steely when she needs to. Clark Gable is charming, Victor Fleming urbane. During his investigation into the Munchkin murder Peters even runs across, and is helped by, a detective story writer named Raymond Chandler.

Despite the murders and the plot line, there's something essentially optimistic about Kaminsky's writing. He has the sparse prose that most good writers of private eye stories have, but also conveys a feeling of warmth and nostalgia towards Peters' Hollywood. Unlike, say, James Ellroy's LA Quartet novels, where you feel the California sunshine is simply throwing everything sordid into sharp relief, and the police and detectives are just about able to prevent the whole world from descending into criminality, Kaminsky's work makes you feel that most people are basically okay, and in this sunkissed world Peters is needed to sort out the few exceptions. Murder on the Yellow Brick Road is a crime novel for everyone who's still got a bit of stardust in their eyes.
Labels: 1940s 1970s books crime