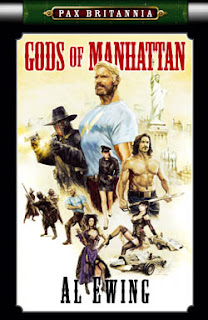 This is not really steampunk, which is what I was expecting, given that Gods of Manhattan is part of Abaddon Books' Pax Britannia series. I've already reviewed a number of books from the series (Blood Royal, Dark Side, and Anno Frankenstein) but all those were written by Jonathan Green, set in an England where Queen Victoria has been preserved in a semi-mechanical form, still reigning over her Empire. Ewing's story is set in the United Soviet States of America, in a warped yet familiar New York.

I don't want to go into too many details about the Pax Britannia universe, but in it the Second World War never happened, although America did have a Second Civil War in the mid 20th century. Early in Gods of Manhattan, Heinrich Donner, a German expatriate businessman who was supposed to have died years earlier, is murdered. Doc Thunder, nigh-indestructible all-American superhero and The Blood Spider, a masked vigilante, are both drawn to investigate. What they don't know is that a Mexican vigilante, El Sombra, is behind the killing, as part of his mission to track down and destroy Nazis, and Donner had led a Nazi-supported terrorist group aiming to weaken the USSA.

As I said, I don't think this is steampunk. That's my personal opinion and if you ask fifty steampunks (I'm not one) 'What is steampunk?' you'll get fifty different answers. However, most of the answers you do get will include the words 'Victorian science fiction', and that's not in Gods of Manhattan. There's no Victoriana; the few scattered references to horse-drawn coaches and some steam power feel added on rather than integral to the story, and you get the feeling that the punk-like Futureheads and zoot-suited breakdancers are firmer parts of Ewing's vision of the USSA. But that's no bad thing. If I had to slap a label on it, I'd says Gods of Manhattan is dieselpunk. Perhaps that says something about Britain and America, and if Britain's heyday was the 19th century, America owned the 20th, so it's natural that Ewing's book owes more to the pulps and comics of the second and third quarters of the 20th century than to the science fiction of Jules Verne and HG Wells.

The heroes themselves do echo classic superheroes and pulp characters. El Sombra's name translates as The Shadow, obviously, and he laughs manically as The Shadow does, but with his sword and bandit mask and Mexican ancestry there's also a good dollop of Zorro in there. Doc Thunder feels part Superman, part Doc Savage. The Blood Spider also has something of The Shadow and possibly Batman in him, with his rich playboy alter ego. Even the villains have a little Lex Luthor, a little Blofeld in their makeup. You can't map the characters one-on-one with older ones, though, El Sombra is not Zorro or the Shadow, even if he has them in his very near ancestry. He's got his own quirks and traits - they all do.

I think fans of pulps and superhero tales will really enjoy this book. It's fast and pacy, the fictional New York is the city of all your favourite 1920s-1950s comics and noirs, the plot is really well done, and while I found the variety of ways in which characters get tied up a little tedious (nobody has sex, but there's a fair bit of mild chaining and beating) it's not detailed enough to offend anyone but the most prudish of readers. I'm definitely going to look up Al Ewing's first book in the series, El Sombra.

Book source: given to me in a clearout
Labels: books dieselpunk pulp steampunk