If lockdown's been good for one thing, it's been taking a good look at what clothes I own, and being able to get dressed each day free of wondering whether what I wear is acceptable to other people. (I know, I shouldn't worry about that sort of thing, but I don't like standing out much in public places.) Yesterday I had a chat online with a friend who never used to dress in a very feminine way but is embracing her girly side in her late 30s. She was concerned that a certain hairstyle might be too young for her.

You can look however you want to like, I assured her. 'Too young' is just made up by people who think women should look a certain way, ie young and shaggable (their definition of shaggable), or be invisible.

And the conversation went on and I swiftly realised I was a bit of a hypocrite, because while I do buy clothes I like, I temper my choices to meet expectations. Yet so many of my favourite bloggers don't wear what people expect women their age to wear, and they look fabulous. So this morning, inspired by my pal and my blogging chums, I decided to put together an outfit I really wanted to wear.

I half-joked in my post about handbags that I was tempted to go the full pre-Raphaelite. Mr Robot tends to disapprove of such things; 'looks like you should be selling crystals in Glastonbury' rivals 'it's a bit Abigail's Party' for comments he's made on clothes in the past. But this morning I went for floppy and floaty, with argyll tights in witchy black and grey, a fossil pendant and a honking great blast of Shalimar to top it all off. In fairness, this dress gets worn regularly and is hardly extravagant, it's just a black crepe tea dress from Monsoon. It's the same one I wore on our anniversary trip to the Hand And Flowers; when in doubt, plain black's always my fall-back.

The cardigan's the first cardi I ever knitted; I swapped the recommended wool yarn for cotton but hadn't really grasped the notion of tension and the fact different fibres knit up differently and the result was me running out of yarn and not understanding why, buying a load more, and ending up with a cardi about 20% larger than it should have been. The sleeves extend a good six inches past my fingertips; after taking these photos one very nearly ended up in my morning porridge.

I have a feeling the pendant was a gift years ago from my godmother. I definitely didn't buy it myself. It doesn't get worn often because it's quite dramatic, but maybe it should.

Anyway, looking at these photos, it's all fairly unremarkable. The only comment anyone would be likely to make is 'your cardi doesn't fit.' (I'm not counting 'who died?' because after my goth years dressed in top-to-toe black that one's worn very thin, and it wasn't original the first time anyone said it.) Dunno what I was so worried about. 'Look however you want to look' is good advice; I ought to take it myself. 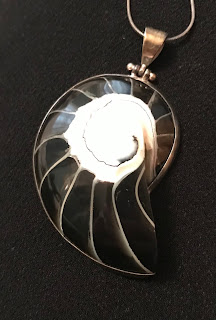