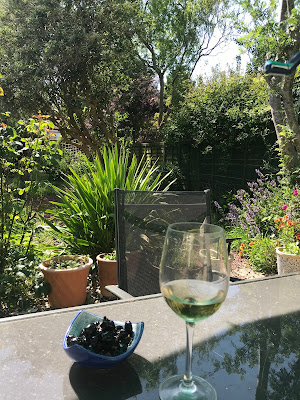 As mentioned in my previous post, last week we should have been having sherry in the sun in Malaga, which the 'rona knocked squarely on the head. Still, we made the most of our lovely garden. We've put in some new plants, and the tomatoes are thriving. Yesterday we whipped up some Spanish food and sat outside enjoying it all. (I even managed to take a nice photo of it, with no view of the washing line or the terrace that backs onto ours. Heh.)


On Saturday I finally got round to finishing my shirtdress, made a mask to match (just in case I have to go in anywhere that prefers masks to be worn) and I started work on the 60s knitted jacket again. Because I'd used a substitute yarn, part of the neck hadn't knitted up quite right, and I'd been resisting ripping the dodgy bit back and reknitting it, fearing it was going to be really complicated and take ages. However, on a roll from the dress I started tackling the knit too, and it's proving really easy. Who knows, it might be finished by the end of May! 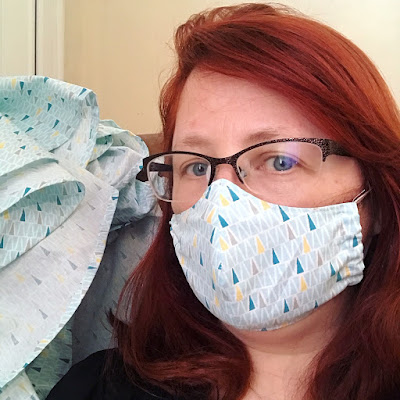 I've done my usual late spring/early summer mothproofing. It was really lovely seeing all my vintage clothes again, and thanks to lockdown I've been wearing more of my vintage recently, so there was none of the vague regret of recent years. What's more, I'm soon going to have more wearable vintage. Last week I got a dress on Ebay (Buy It Now) and then won another in an auction – that one was only £8. The first is pale green, with a pattern of navy and white circles on, and the second white with a pale blue print. I'm pretty sure both are late 60s or early 70s. (If you read Ann's blog, they're both quite 'Polyester Princess' in style.) I'll model those, and my new me-made dress, for you at some point. 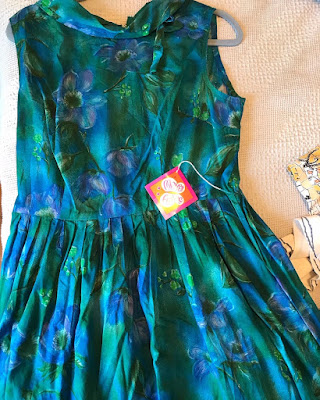 By the way, has anybody got any ideas how to look after a 1930s velvet dress? I've got one hanging up but I'm concerned about straining the shoulders – but I also worry about flattening the pile if it's laid down too long.

All this recent productivity ought to continue for some time as my company wants us all to work from home for a few more months. We'll have the option to carry on even after that, too, and I'm seriously considering seeing if I can work from home most of the time, going into the office one or maybe two days a week. I'll be able to go to they gym first thing in the morning, it'll save me a ton of money on train fares, and I was already trying to do one day a week at home for mental health reasons anyhow. It'll be a big change but one that looks like being totally positive. 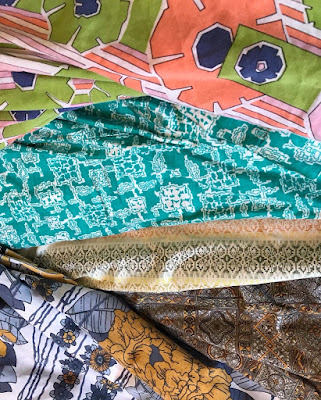 It's not all been sunshine and flowers. I've fallen out with a friend, which part of me regrets, but it was my decision to walk away so I get to live with the consequences. That said, they often made me feel boring and unwanted, and so I suspect I'll miss them far more than they'll miss me. I've probably done both of us a favour! When lockdown ends, especially if I am working from home more, I'm going to make more effort to hop on the train and visit people who do want to spend time with me, especially my steampunk and goth friends out west who I haven't seen in so long it's ridiculous. Something like this makes me appreciate them all the more. And, indeed, appreciate you all the more.

Hmm. That's a downbeat way to end a post, isn't it? Rest assured I am upbeat and perky, and already planning more vintage sewing projects! But first, I'm going to go and read some blogs and show that appreciation. Stay safe!
Labels: 1960s clothing knitting lockdown