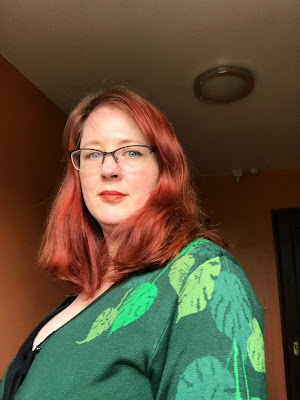 Besides posting here, there are a few things I haven’t done or won’t be doing this month. Didn’t go to see Nick Cave in Cardiff at the start of May. (The gig's been rescheduled for next year.) Won’t be going to Malaga at the end of it. (We're quite relieved we hadn't got round to booking our big September holiday either, as that'd probably have to be abandoned too. In fact, I didn’t go anywhere that wasn’t Tesco, the butcher, or a one-mile loop through town for exercise. Still haven’t put the buttons on the dress I’m making. This month is looking like an awful lot of NO.


One thing I did manage was a nice birthday for Mr Robot. Knowing it might take longer to get presents, I ordered them during April. Usually I’d get him a pile of little things, but this year he had to settle for two big ones, a bottle of Frederic Malle Musc Ravageur aftershave, and a bottle of Ardbeg 10-year-old. (He’d better not mix up which one’s for drinking and which one’s for wearing…)

We also had a nice birthday dinner at home, as going out for a fancy one wasn’t an option. The first two courses were sensible, a celeriac remoulade (recipe from the Brasserie Zedel book) followed by steak and truffle fries, but the pud was a little silly. Earlier in the week he’d said he wanted lemon drizzle dinosaurs with a raspberry ice cream meteor for his cake, so that’s exactly what I gave him. I made the dinos in a silicone mould he gave me for Christmas, and the ice-cream was made in my mini ice cream maker. I got carried away and made a biscuit crater and foliage, and ganache mud too. Mmm, dino apocalypse. 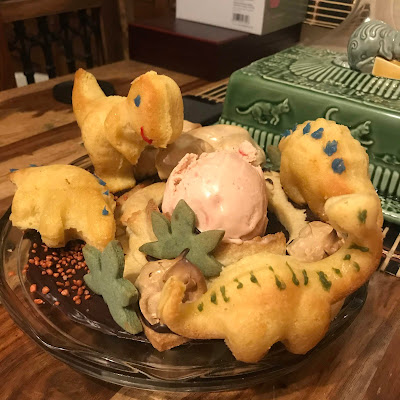 While I may not have completed my dress – Mr Robot did ask “Do you have a fear of completion?” and I fear the answer is “Yes!” – I did finish my Switch sock. It’s done in 2x2 ribbing so it’s nice and stretchy, sliding over the sticks and buttons easily. It should stop my Switch getting scratched in my bag, not that I'll be commuting anywhere for a while yet. 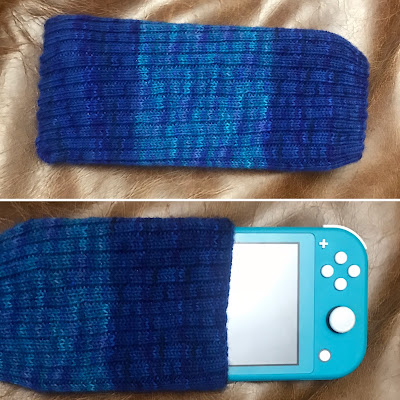 And, of course, I’ve been making magazines for my day job. Still doing the ol’ 9:30-5:30 (unless I’m on deadline when I work for longer; I do a good chunk of unpaid extra time each month). Because shops are shut, Edge 345 was for subscribers and online purchase only; my employer’s online store sold out of copies in 24 hours! It was a special issue devoted to calming, heartwarming feelgood games. Copies are now going for about £25 a pop on Ebay, but I’m keeping mine. 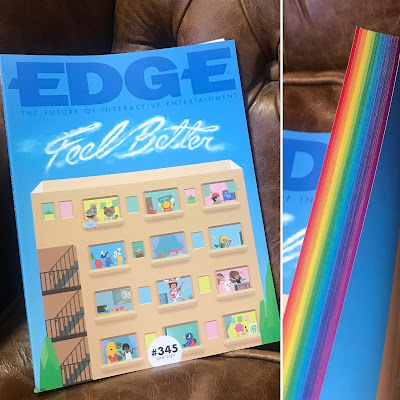 I haven’t dressed up much. Daily Google Hangouts with one of my teams means I do put makeup on every working day, but dressing beyond ‘standard’ is often beyond me, so fancy Fridays haven’t been happening. The space cats skirt made it out of the wardrobe, but that’s about it. I did treat myself to a new cardi (photo at the top of this post); I try not to buy new too often but as soon as I saw the leaf-patterned cardi from Banned I had to have it. It’s very soft, and the leaves are knitted in, not printed on – it’s pretty well made. 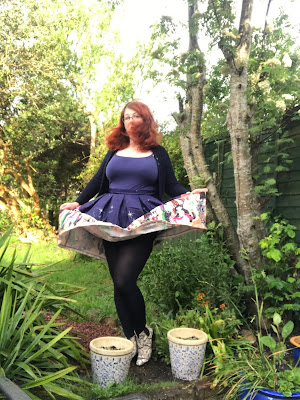 Anyway – we endure. All of us. And maybe next time I post here I’ll have finished something.