A deco dinner at Brasserie Zedel 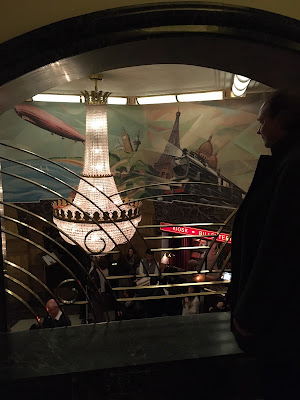 Last weekend Mr Robot took me to Brasserie Zedel for my birthday. I've wanted to go there for so long – perhaps it's a bit of a cliche among vintage lovers, but I don't care. There's always room for a little deco-dence in my life. The building it's housed in was once the Regent Palace hotel, in its day the largest hotel in Europe. Despite the fact it was a listed building, most of the hotel was demolished in the 21st century. The V&A bought and kept the entrance, and below ground Brasserie Zedel occupies the former Grill Room, the Bar Americain is in the original 1930s bar, and the former billiard room is now Le Crazy Coq's cabaret, the interior recreated from 1930s architectural drawings. How could that not appeal to us?

The day began with a few hiccups. The train before ours was cancelled and so our seat reservations were cancelled so we had to stand most of the way to London, and when we arrived at our hotel something had cut out all the electricity in the area. We bimbled across Hyde Park to the V&A so I could see Queen Victoria's sapphire coronet, which was acquired for the jewellery collection last year, then returned to the hotel. Still no electricity. I redid my makeup by the window as dusk fell, and got changed by it hoping no-one was looking down (we were in the basement), and was a little disgruntled when we arrived at Zedel. But it was so lovely walking down the stairs into that marvellous entrance area that by the time we reached the Bar Americain I was 'gruntled' once more. 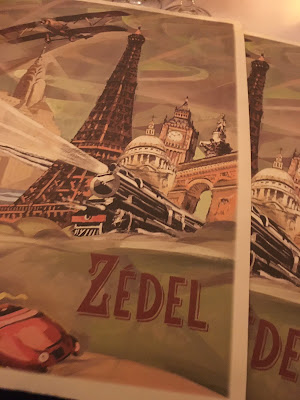 The interior of the Bar Americain was designed in the mid 1930s. The walls are panelled in wood, great broad horizontal stripes. The whole place has a distinctly sepia tone. You'll have to make do with a slightly blurry photo of Mr Robot choosing from the cocktail menu as my phone camera struggled in the low light. 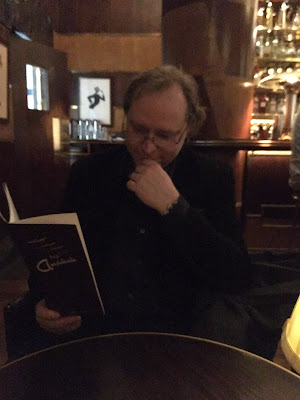 I hadn't expected it to be so busy, but we had to queue to go in. Still, with it being so lovely, I shouldn't be surprised people want to drink there. The staff checked whether we were eating, and as soon as our table was ready in the brasserie someone came to collect us. 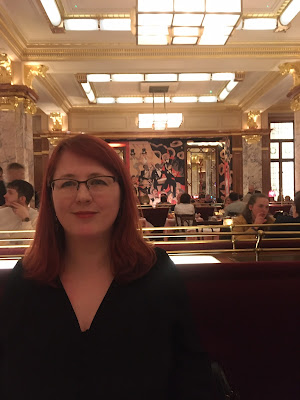 The brasserie is brighter and lighter, a very big open room. The menu isn't fancy, it's proper French cafe food. I had a cornet of ham filled with Russian salad for starter, and Mr Robot had steak tartare. We both had the choucroute 'Zedel' as a main, sauerkraut with all sorts of meats and sausages. 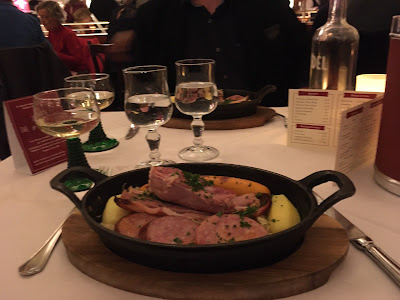 By the end we were very full so finished with cafe gourmand, coffee plus tiny cakes. Zedel is a happy, unpretentious place. I dressed nicely, in my black House Of Foxy 'Evelyn' dress, but plenty of people were there in regular day clothes. 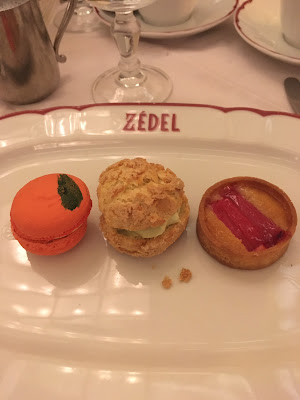 The reason for dressing up was that after dinner we went to Le Crazy Coqs to see the cabaret. I don't have any photos from that, because I was having too much fun to take any. The host was Dusty Limits, one of London's leading cabaret stars. With his eyeshadow and arch delivery he really made the whole thing feel the way I always imagined the cabarets of Berlin and London to feel in their heyday. My favourite act was La Poule Plombee, a beautiful parody of a slightly histrionic French cabaret star, making waspish comments about Piaf and crying at the audience – and her final song, a tragic chanson called 'Your Baby Is Ugly' had me in stitches. The burlesque artiste was really good too, but I cannot remember her name - as beautiful as her figure was, it was the expressiveness of her face that got me. She could hold a stage.

The cabaret really was the perfect end to the evening. Okay, I was quite boozed up by that point, but the small, intimate venue, the talented performers, and the beautiful setting all made me feel like I'd had a little glimpse of the glamorous and naughty nightlife of the 1930s.

It was a wonderful evening!
Labels: 1930s burlesque food London