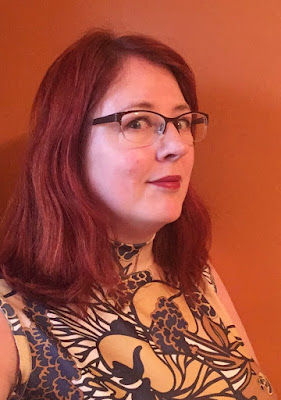 Following on from my last post, it looks like I'm no longer alone in working from home – most of the western world's doing it now. And I'm happy to report I have not gone completely feral, either. Daily Google Hangouts with the Official PlayStation Magazine team mean I've been putting makeup on and dressing fairly nicely.


At first dressing nicely felt like a chore, and putting on makeup like an irritant. After all, I don't bother at weekends. But several days in, I'm glad I'm doing it. It puts a bit of structure in the day, and makes me feel more ready to work somehow. I'm sticking to my work hours too, again to give the day some shape.

This morning I had a revelation: all the clothes that are just a leeeeetle too tight round the tum or bust? I'M GOING TO WEAR THEM! There's no-one around to see them, aside from Team OPM, who're only going to see my shoulders, so why not? First out of the wardrobe was this splendid 1960s top, which is far too booby to wear usually, but I've hung onto because I love. Look at that fab psychedelic print.

My pal Julia suggested (on Twitter) that we do 'Seriously F*** Casual Friday' tomorrow and everyone working from home gets dressed to the nines. I wasn't up for that, as nowadays trying to look nice gets depressing, but actually I'm now thinking I should break out one of my other pieces of psychedelic polyester and make a go of it. Maybe even pile on the colourful makeup too.

It's nice to be giving some of my underworn vintage a wearing, to be able to enjoy it. Because honestly, I am worried. Friends who are doctors in London (which has been hit by CV far worse than the rest of the UK so far) are saying things are looking really bad, and on a personal level I have elderly relatives. On top of that, my job involves making a non-essential physical thing; magazine sales are going to plummet. So, sorry if you follow me on social media, but I'm going to be mentioning subscriptions and buying magazines by mail order, because if this goes on for months, I might not have a job at the end of it all. BUT I am not ill, Mr Robot's not ill, and we've got to keep going, as long as that doesn't involve going out. Things could be worse.

And now I'm going to go and look at your blogs and see how you're doing. Stay safe, lovelies, and maybe stay psychedelic too.
Labels: 1960s aargh clothing lockdown