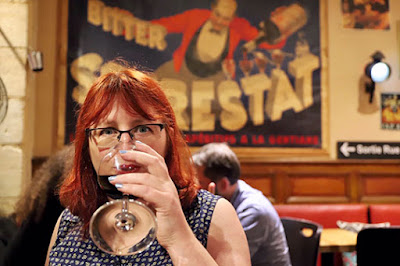 We're back from a super week in Bordeaux. And yes, we sampled plenty of the local produce – well, it'd be rude not to, wouldn't it?

Our hotel was the Hotel Particulier. The name's actually a pun, as it's the French term for a grand townhouse, but, of course, this one has become a hotel. We booked too late to be in the hotel proper so had to book a little apartment, which was just lovely, with a big sitting room and dinky little kitchenette and shower room. Although our rooms overlooked the street, we had the windows open all the time. Trams make the strangest noise, a sort of whooshing. It's actually quite a relaxing sound.

I'd looked at maps of the city before going but had got the scale wrong; I'd thought we were five minutes' walk from the cathedral when it was a minute straight down the street. We always book somewhere in the historic heart of the city – rule of travel number one: always get the best location. Location before luxury. Though it's perfectly possible to get both in most places. 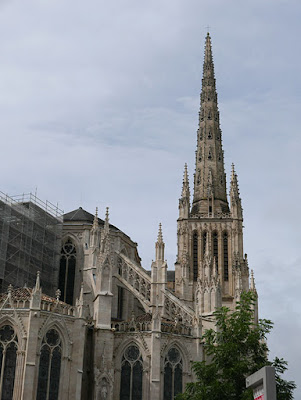 If you're in the old town, Bordeaux is really lovely to wander round on foot. I say old town; the city was essentially rebuilt in the late 1600s and 1700s, so it's in many ways pretty modern. Many of the streets are broad, and the buildings tall and graceful. A couple of historic gates and some important churches are really all that remains of the city before then. On some streets signs tell you what was once on that site, such as the monastery whose occupants would pay Barbary pirates to release captives. Two of the most notable sights – the cathedral and the Place de la Bourse – were being renovated and so partially covered in scaffolding, but that didn't detract from the city's charm.
There were plenty of museums and galleries to visit. That's what we did most mornings. They all seemed to open around 11am, which struck me as very civilised as it meant we could have a late night eating and drinking, then get a good night's sleep and rise refreshed and ready to fill our brains. We visited the fine art museum (which had a Goya exhibition on), the decorative art museum (which had a special exhibition of Memphis Group furniture), the Musee d'Aquitaine, and the cathedral. We had hoped to go out to one of the nearby wine towns, perhaps Saint Emilion, but the weather was patchy so we stuck close to town.
The museums and galleries were odd as a lot of the time they gave the impression of being put together from collections benefactors had left to the city. Several passionate amateur archaeologists, and a wealth of prehistoric remains in the area, meant the stone age section of the Musee d'Aquitaine was outstanding, for example, but later eras were sketchily presented – I'd be hard pushed to tell you anything at all about medieval Bordeaux beyond Eleanor of Aquitaine from what we saw there. I don't regret going to any of them, but they were distinctly quirky.
I didn't do any shopping for the trip, and did very little on it. It's kind of nice not needing anything. I did buy a trio of tea towels (lord help me, I've turned into my Nannie Mac – as a child I always wondered why she had so many souvenir tea towels and now I have my own collection). I also bought a load of French soap, which will scent my knitwear drawer till it gets used, and a small bottle of vintage perfume... 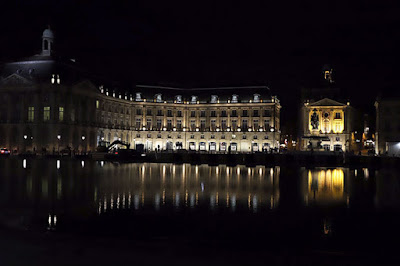 Do you have recurring dreams? Every so often I have one where I'm in a shop that sells all sorts of miniatures of rare and vintage perfumes. I'm not sure what sparks these off, but I suspect they're anxiety dreams of sorts, perhaps telling me there's something I need but haven't managed to find. Coming across a bizarre little junk shop with the very polari-sounding name of Bijoux Curiosa and discovering a cabinet of old perfume minis at the back felt very surreal after a boozy lunch. We went back the next day and I did not buy the pricy bottle of Guerlain Mitsouko, I bought a tiny 20-Euro bottle of Rochas Femme. I figured I could afford to lose that money if the juice was rubbish. And... got it home to discover it's scentless. If it hasn't been refilled with coloured water, the fragrance has been utterly killed by years of heat and light. I'll keep it; it's a pretty thing. Maybe I'll refill it with something else! But I'm glad I didn't splash out on the Mitsouko, and perhaps now I've had that experience I won't have the dreams any more.
All in all, it was a very relaxing trip, and I'm glad we went. We ate masses of very good food, and drank rather too much excellent wine, and now feel properly set up for the rest of 2019.
Labels: Bordeaux France travel