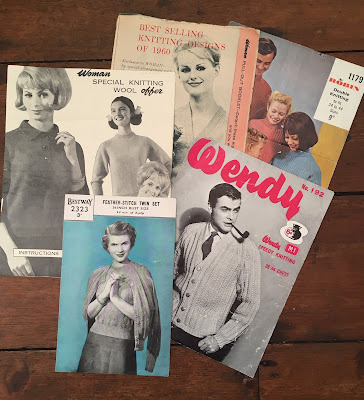 Look what arrived in the post from Veronica! A set of lovely midcentury knitting patterns. I’m always amazed the ones that came as pullouts from magazines or newspapers, like the ones at the back-left and back-centre here, have survived as the paper wasn’t the strongest to start with, so I take good care of them.
I'd be most likely to wear the feather-stitch twin set, but the one that really intrigued me was the most Best Selling Knitting Designs Of 1960. Now, I’m not convinced it does contain the most popular designs, simply because I’ve worked on a knitting magazine and I know the odds of one or two things from every category from baby clothes to menswear turning up in the premier handful is pretty much nonexistent. Menswear's never in the 'most popular' category, though I do accept more women were knitting for cheapness back then – there's a reason my nannie Mac knitted all her children's socks – so probably more people did knit for men in general. However, I definitely struggle to imagine a knitted party dress being more popular than the many women’s jumper and cardi patterns that would have been available. It’s possible that the ones featured were the most popular designs within their individual categories, and that’s interesting as it gives a look at what people were choosing to make, rather than what shops were selling.
One thing that struck me was how many of the designs have raglan sleeves – in case you’re not sure what that is, it’s where the sleeve and shoulder are all made in one piece, so you get the strong diagonal seams at the front and back of the shoulder. Set-in sleeves, where the front of the shoulder is knitted with the front piece, the back with the back, and the outer part with the sleeve, are very common in patterns I’ve seen and made from the 1930s and 1940s, but I know part of Dior’s New Look was introducing a more sloping shoulder. Did raglans become more popular with knitters off the back of that? It has inspired me to dig through my patterns to see if I can identify when the trend took hold. Another possibility is that is came over as fashion got more casual and sporty; when I have seen raglan knits from the 1930s and 1940s they’ve usually been on more laidback styles, and often worked in thicker wool.

The pattern goodness doesn't end there. Gisela also gave me some sewing magazines and patterns when I met up with her recently, and one is for a simple unlined jacket. I was on the verge of making it with some emerald green linen I’ve got, when it struck me that I have a vintage Peggy Page jacket in green and it doesn’t get nearly enough wearings as I don’t have much to pair it with, so really I should use the linen for something to team with that. I’m tempted to make the jacket using the Indian silk I had left over from making cushion covers – but red or gold? Hmmm...
Labels: 1950s 1960s knitting