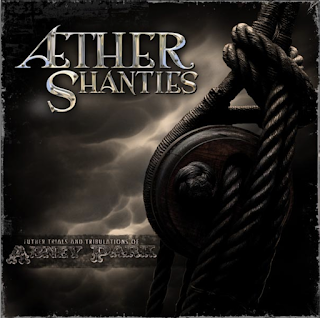 I reviewed a very punky steampunk album back in April, which I knew wouldn’t be to most people’s taste. However, one of the things I love about steampunk is its diversity and creativity; if one thing doesn't appeal to you, the next thing might be just your cup of duelling tea. That’s especially true on the musical front, which covers everything from chap-hop to punk to things like Abney Park. Their music is full of lush harmonies and instruments beyond the band-standard drums and guitars. Violin, piano and banjo are three that feature in particular. The lead singer is male but there’s often a female vocal harmonising and intertwining.


Abney Park started as a goth band – which, as you’ll know, is hardly something that’d put me off – but Ancient World and Aether Shanties both date from after the band’s transition to steampunk. Lyrically they stick very much to the fictional world they’re creating, with lots of references to airships and mechanical devices. A lot of the songs feel vaguely melancholy, about alienation from the world or isolation from loved ones and a desire to escape, all set against a background of mechanisation and change, but there’s also a great deal of humour in some songs. And because of those two intertwining voices, that clear, if slightly husky, male voice and soaring, clear female one, there’s an intricacy to the words that’s really appealing. ‘Can’t Talk About It’ on Ancient World is particularly lovely.

Like steampunk itself, there are plenty of borrowings from the past in the music, and that too is something that appeals to me. ‘Rag Time Punk (Stealing From The Past)’ on Ancient World lifts gleefully from classic piano tune ‘The Entertainer’, and ‘Fix The Boat, Or Swim’ is a lazy, tropical-feeling ode to pulling yourself together and getting on with it. Naturally, Aether Shanties has more than one melody with a tang of salt about it, especially the title track and ‘The Derelict’, based on the shanty in Robert Louis Stevenson’s Treasure Island. ‘Throw Them Overboard’is a real earworm, and ‘Until The Day You Die’ is another catchy ragtime-based number.

I've been listening to these albums a fair bit lately as I don't have anything else quite like them. I don't know if I could say outright that they would appeal to any one person who visits my blog, but I do think they're worth giving a try. Who knows, you might find a bit of aether-borne yo-ho-ho-ing more to your taste than you expect!
Labels: Music steampunk