Gisela and Mim get steamy!

On Saturday I went over to Didcot to meet up with the ever-brilliant Gisela of Miss Magpie's Musings.  It felt like ages since we'd last met up, so she suggested a day at Didcot Railway Centre, which I was very much up for. You can't really beat a day with good company and steam trains, can you? And fortune smiled on us and we had brilliant weather for the day.
The enthusiasts at Didcot are heroes when it comes to railway preservation, the whole thing having started in the 1960s when four schoolboys decided to purchase a steam train in order to preserve it. From there, over many decades, things grew, and more and more engines and carriages were saved from the scrapyard.

I was surprised to realise how easy it is to access the site from Didcot's mainline station. (NB it's very close, but steps are unavoidable.) The centre occupies the Didcot locomotive depot, which became redundant in the 1960s. This meant it had track, workshops, and everything the enthusiasts needed to preserve engines and carriages. It's even got a working water tower for refilling steam engines.

The 1930s engine shed has been used for a lot of filming; recently it doubled for Moscow station in Anna Karenina (2012), and was also used in The Danish Girl. That said, the site didn't have much in the way of passenger facilities back when it was first taken over – British Rail kept hold of Didcot station. 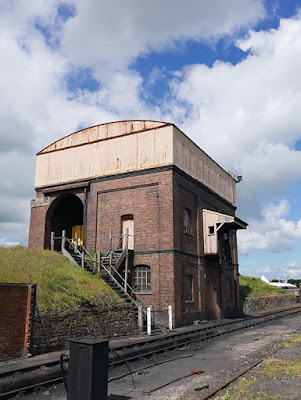 Gisela mentioned that when Oxford's old Grade II-listed railway station was sold a few years ago, Didcot wanted it but it ended up being sold somewhere in Buckinghamshire, which is a bit of a shame. It's actually Oxford University's fault the railway came through Didcot, as initially that was as close as the University was prepared to allow it to come. You'd have thought given all that the University could've given them the station – it's not like the University's short of cash. However, I was tickled to see they had a few bits from Frome there. Frome is just down the road from me; I can't drive and Frome's train service nowadays is abominable so I rarely go there. The buildings at Didcot probably see more trains nowadays!
There were plenty of interesting things to look at around the site. There was a super one-room museum, where we spent a lot of time looking at the map, and considering all the branch lines which got closed in the 1960s. Naturally we both admired all the vintage travel posters and brochures – who doesn't love those glorious art deco posters advertising exotic destinations like St Ives or Weston-Super-Mare – and all the crockery and cutlery from various eras. There are much larger collections available to researchers, but what's on show is great. (The textile nut in me would've loved to see more on carriage interiors, on the moquette patterns used, and paint colours, and what different-era dining cars looked like, but I accept I'm a bit nerdy in that regard.) 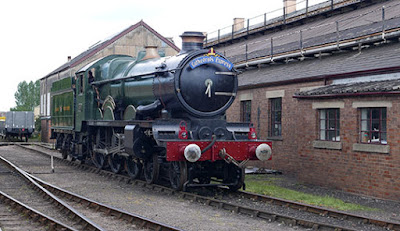 There was also a Second World War bomb shelter, all kitted out so visitors could see what the railway workers would have had to rush to whenever bombers were sighted. As the railway network was a vital part of the country's infrastructure, places like Didcot were prime targets. Must've been terrifying being down here while bombs rained down overhead. It didn't look very comfortable, but I suppose no-one would plan to sleep here, they'd just come down whenever there was an alert. 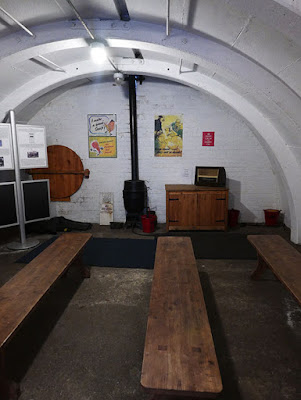 Something which you don't tend to see at many heritage railway sites was the installation housing the electronic control panels which were used at Swindon in the 1960s. Now backed up with a cunning computer program, they simulate the day-to-day running of the rail network back then, to give people a taste of how people directed trains on a busy section of track. I did like seeing more of the later 20th century hardware as it's something that's often overlooked in favour of the steam era, but it's still fascinating.

One thing that did surprise me was how little track there was – I've ridden on less well-known heritage railways such as the Swindon and Cricklade, and expected this one to have miles to travel on, but the journey from one end of the site to the other must've been about five minutes. Probably, like the lack of an original station, to do with the site being a repurposed works beside a mainline station and track that's still in use. 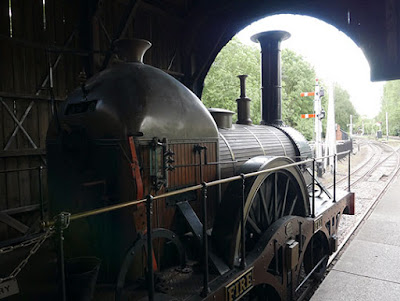 While it might not have the longest track, it does have the wide-gauge track that Brunel's Great Western ran on, plus replicas of two early engines, Firefly and Iron Duke. It was great to see those, and the incredibly basic carriages early passengers had to put up with. Second class was really luxurious; passengers in those carriages got a roof. Third-class ones had to put up with the wind and rain (and presumably all the smuts from the engine too).

Of course, it wasn't all trains: there was tea and cake, and much chatter, and then there was cider and even more chatter. Then it was time to go home, but we won't leave it as long before our next get-together, I'm sure... we were musing over attacking the next Classic Car Boot in London, especially if Vix is trading. I'm really looking forward to our next adventure!