May is the best month! 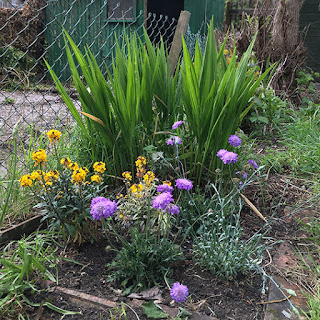 Aaaah! Aren’t you ready for the warmer weather? I know I am. May is definitely my favourite month of the year, though the current rain is not what I'd expect. We've been doing some serious Hobbitting over the Easter and May Bank Holiday weekends. Things are just starting to come to life properly in the garden. I’ve been growing some things from seed, and also bought some tiny seedlings at the garden centre that I’ve been nurturing. We cheated and bought these splendid ones fully grown, as Mr Robot was determined to have colour RIGHT NOW and wasn't prepared to wait.

Our garden’s split into three – I can’t remember if I’ve mentioned that before. It’s not a big garden, being only as wide as our house (a single room wide) but it is proportionally long and narrow and therefore easily segmented. There’s the patio, which has blue fencing and blue and terracotta pots on, and our table and chairs for eating outside. Then comes the lawn and flowerbeds, which have green fences (because with plants in front of them, the green makes the garden seem bigger). Then there’s the long-neglected veg area, which again has anything paintable painted green, to make everything seem lusher and larger.

Last year I put a lot of effort into my flowers and the weeding, and was really pleased with both the colour that resulted, and the neatness that meant we didn’t retreat back indoors from weedy chaos in August! A lot of the same plants are going in this year, such as linaria ‘Flamenco’, phlox ‘Tapestry’ and dahlia ‘Bishop’s Children’ as they looked so good. Though after today's rain I have fewer dahlias than I started out with – grrrr! Two new (to me) types of plant are scabious 'Black Knight' and zinnia 'Queenie Orange Lime'; I planted the latter after seeing how good a friend's zinnias looked on Instagram last year. 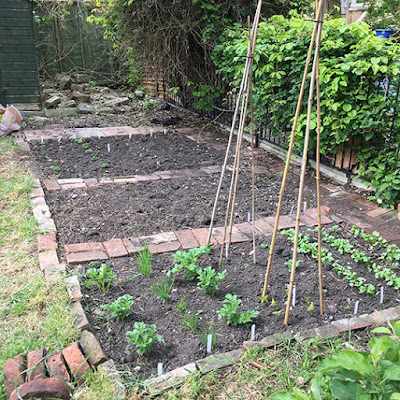 This spring we painted a dingy wall by the patio a nice bright white, and Mr Robot’s been an absolute hero, redoing the path through the flowery area and clearing away the rubble which had accumulated on the veg patch, so for the first time in a few years we have veg patches again and all sorts of things growing. Lots of potatoes, including pink fir apples for good potato salads, and some mooli along with the usual suspects so I can make Vietnamese-style pickles. I've got tomato and aubergine plants on the patio, and basil and coriander, though whether they'll survive the wet weather and slugs is anyone's guess. 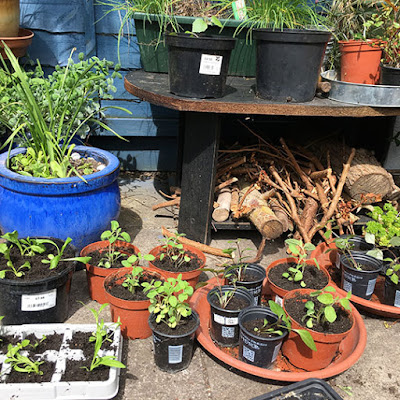 The garden’s not consciously a vintage-style one, but it is a very English sort of garden, and there’s a timelessness to that. While a gardener from, say, 1930 or 1950 might look at it and wonder about the varieties of flowers I’m growing, most of the species would’ve been very familiar to them. Dunno what they’d say about the blue patio fencing, but given how hard it’s been to find the right colour fence paint this year, that’s going out of fashion so will probably count as retro in a decade or so!

What's your favourite flower in a garden?
Labels: gardening