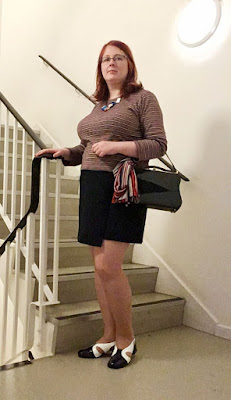 If you’re looking at this photo and thinking, “That outfit looks familiar”, well yes it mostly does. It’s virtually the same as the outfit I wore to see Caro Emerald last year. One of my colleagues, who worked for science fiction mag SFX, was leaving work on Friday. As well as making magazines, he’s a published author; if you fancy a bit of 60s-set supernatural spy-fi – two parts Len Deighton to one part Lovecraft – I recommend The War In The Dark by Nick Setchfield (and I will review it properly later this month).


As Nick’s a fan of midcentury spy-fi, I wanted to dress appropriately. The stripy top isn’t quite a ‘poor boy’ sweater but is reasonably close. It cost me £1.50 in a charity shop. Win. I also tied a scarf to the handle of my Goody bag in matching colours; this was part of the care parcel Gisela sent me before Christmas. For some reason all the navy things look almost black in this photo, but it's actually navy. And the necklace was a gift from my non-blogging pal Andrea (@lostgoth on Instagram). It’s the Ello Worm from Labyrinth. I did learn one thing from my Caro Emerald outfit: my navy and white Modshoes slingbacks don’t work with navy opaque tights. Sheer, fleshtones ones it was, then. The shoes got compliments later, which was nice. Even the perfume was on theme, being Balmain Jolie Madame, that most Cathy Gale of scents.

I feel really good in this sort of outfit. That’s a bit of a rarity nowadays. Why don’t I dress like this more often? Put simply, I don’t have the pieces. (Setting aside the original vintage I own that’s too small – but I’m working on that.) An A-line mini is on my 2019 Make Nine list, but if I can nail down a pattern that works for me, there’s no reason to stick at just one.

On the topic of Make Nine and other resolutions, today was my second 'phone-free Sunday'. (It's not strictly phone-free as I can still be called/texted, I'm just staying off Twitter, Discord and Instagram.) It's already a massive success as far as I'm concerned. I'm getting more done, both useful housework and more creative things, and feeling less stressed. Successful outfit, successful Sunday. I hope yours has been as much fun.
Labels: 1960s outfit post