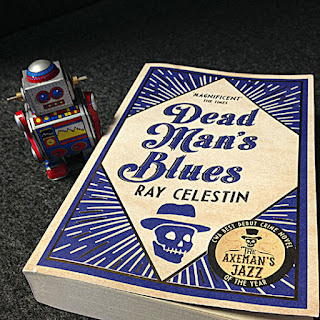 Somehow Ray Celestin's debut novel, The Axeman's Jazz, passed me by, but after reading this, his second, it's rocketed to the top of my book shopping list.

Dead Man's Blues is set in Chicago in 1928, a long, hot summer when Al Capone's power was at its peak, and follows three investigations: two Pinkertons, Ida Davis and Michael Talbot, are on the trail of a missing rich girl. Gangster Dante Sanfelippo is brought in by Capone to investigate a poisoning that appears to be an attack on his operation. And crime scene photographer Jacob Russo, whose disability prevents him joining the police force, feels compelled to look into a gruesome killing on his own.

Chicago is as much a character as the detectives. It interacts with them, its districts like changing moods, its heat affecting their actions. There's a sense of something boiling; not just the weather, but society. On a few occasions you see things through Capone's eyes, and on others you see things through Louis Armstrong's eyes. While this is a crime novel, notions of justice and injustice run through it, both in the individual sense – who is a criminal, and who decides who should be punished, and how – and on a society level – poverty and racism are both shown. Ida is a light-skinned African-American who 'passes', Michael's wife is African-American, and Celestin depicts a complex, intersectional sort of discrimination. Complex and intersectional like Chicago itself.


And there's a musicality to the novel - almost literally, as the book is divided into sections (almost) copying the structure of Louis Armstrong's 'West End Blues'. Celestin talks about this, and the few changes he's made to history to strengthen the story, at the end of the novel. He also says The Axeman's Jazz and Dead Man's Blues are intended to be part of 'a four-part series which charts the history of jazz and the Mob through the middle fifty years of the twentieth century... each of the four parts will contain a different city, decade, song, season, theme and weather.' That's music to my ears.
Labels: 1920s books crime