Back In Time For Tea 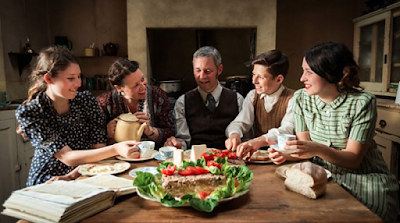 Did you think the BBC couldn't possibly take any more forays into culinary history. WELL YOU WERE WRONG!

A new series, Back In Time For Tea, starts on BBC2 on Tuesday 6 February.
The Ellis family will be eating meals typical of a working-class family in the north of England, progressing through time. The starting date is 1918, just after the end of the First World War. That starting date is a little later than Further Back In Time For Dinner, and makes me wonder whether they'll take a decade-by-decade approach like that programme, or will try to cover a whole century over the six-programme run, ending now.

I have to confess, the press releases do trigger one of my rants as they focus mainly on the location. Using the word 'tea' for the evening meal is as much to do with class as geography; as someone from a working class East Anglian background who benefited from free university education and so is more middle class nowadays, I still cook 'tea' at home, but go out for 'dinner' – I grew up eating at home, but only really started going out as an adult. The different usages came about because of the time of the evening meal. The middle and upper classes tended to eat later, around 8-9pm; that was dinner. Tea was the afternoon meal. We're all familiar with afternoon tea, and nowadays the term 'high tea' gets misapplied to afternoon tea, but historically high tea got its name from being later in the afternoon and was a more substantial meal with hot components. The sort of thing farm labourers would have when getting in from the field, or factory workers at the end of their shift, or domestic servants would have before serving dinner to their employers. They weren't going to wait 'til 8 for their food!

That said, I do like the fact that they're concentrating on a particular region's foods, as there are still different food cultures all round the UK. Mr Robot's family is from the north-west; I hope the poor Ellises don't have to eat the lard sandwiches his mum was fed as a child, nor the home-made 'cottage cheese' (basically sour milk strained through old tights) that his nan used to make! Here's hoping for Bury black puddings, Lancashire hotpot and other tasty things. (Mmm, now I'm thinking of the delicious cow heel pie we had at a pub in Bolton...)

After the disappointment of Frankie Drake, which was simply too laden with silliness and anachronism to be bearable* this should be a proper palate cleanser.

*Seriously, it was like someone decided to film an amateur 'murder mystery' evening. Everything from script to costumes was not good.
Labels: food television