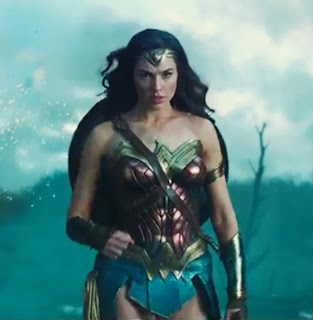 Have you seen the trailer for the forthcoming Wonder Woman film yet? I missed the early announcement that three films were planned. Well, the first one was rumoured to be set in the 1920s, though that doesn't look the case to me. There's the line 'War to end all wars', which would suggest the First World War, as indeed would the costumes in the dress shop scene at the end of the trailer, and the badges on the planes. (I was a bit baffled by the way that all the planes in the trailer appear to be monoplanes; some were used in WWI though biplanes were more common.) I am so up for Edwardian Diana Prince!

If the rumours are still vaguely accurate, the next film is going to be set in the 1930s/1940s, which would be likewise brilliant. My only regret? That Wonder Woman is DC and Peggy Carter is Marvel. A Wonder Woman/Peggy Carter 1940s-set movie would be just about my favourite thing ever.
Labels: film heroes