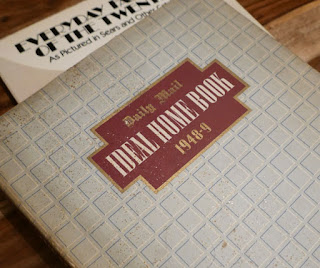 The Oxfam bookshop in Bath has been quite disappointing for some time – green Penguins, the vintage crime ones, seem nigh-impossible to find nowadays, and I've started to suspect they are all being creamed off for the !*£@ing 'vintage' Oxfam store. However, I still feel the call of the shop every once in a while, and yesterday I turned up a couple of goodies that the staff clearly don't think count as particularly collectable. My big find was this 1948-49 Ideal Home Book.

My other bookshop find, a Dover book of recreations of adverts from 1920s Sears catalogues is less 'wow', but still incredibly interesting.

The Daily Mail* started the Ideal Home Exhibition in 1908, with mock-ups of houses, where everything in the rooms could be purchased. The Exhibition quickly evolved into one that didn't just promote style, but introduced new homewares too – the electric kettle in 1920 and microwave oven in 1947 among them. While it wasn't run from 1940 to 1946 owing to the Second World War, the war couldn't defeat it and the exhibition was back by the end of the 1940s. 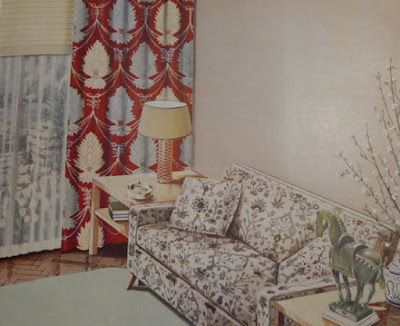 This book reflects that with articles on subjects such as 'Kitchen Equipment', 'Gadgetry', and 'Approach to Heating'. You can see the influence of the war on British homes in references to building restrictions meaning equipment that would previously have been in the scullery or utility room being put in the kitchen. Nowadays sculleries and utility rooms are very rare, so I guess we never got back into the habit of building them.

I was fascinated by adverts like the one below for what came to be known as 'prefabs'; homes prebuilt in sections at a factory and set up quickly on site. The book also has an advert for 'Cornish Unit' prefabs, another style with two stories. Prefabs were built in their thousands between the war and the early 1950s. Nowadays very few remain and a number are Listed by English Heritage. It's striking to see one being advertised as something innovative and highly desirable. 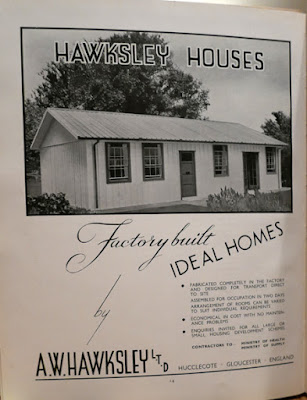 What's interesting about this book is that it shows that while domestic technology was definitely moving forwards, there was a degree of hankering back to much older times. At the very centre of the book is a set of colour reproductions of 18th-century drawings by Thomas Rowlandson, which "would look delightful if suitably mounted and framed". Britain's place in the world was changing dramatically in 1948 – India had gained independence, and other colonies were pushing for it – and there was a degree of national uncertainty as a result. I don't think Britain lost that desire for security for some years; when Elizabeth became Queen in 1952 there was a lot of spouting about 'New Elizabethans', again looking back to a so-called 'golden age'.

Just look at this Ford car advert: the car is up-to-the-minute, but the house is a few hundred years old. It's not the only car advert in the book, and the one for the Standard Vanguard ("For export only during 1948" - Britain was too poor to keep the things it made, they had to be sold overseas) also shows the car in question outside a genuinely old timber-framed house. 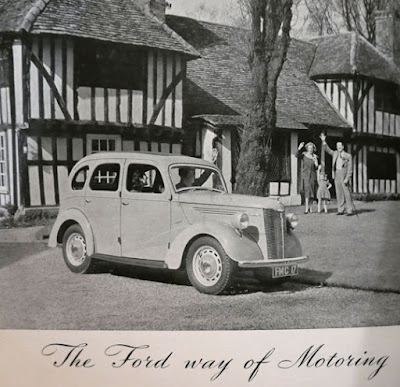 The flipside of that is the rise of more modern styles, and more advanced materials. The deco era before the war embraced machine manufacture and streamlining, of course, but wartime rationing will have removed absolutely every frill and forced people to look at what could be done with less-than-luxurious materials. I'd never really considered it before, but looking at the book makes me wonder how much the experience of rationing and utility regulations impacted on 1950s design. Certainly articles on converting stables into homes, and houses into flats, show how great the need for new housing was in bomb-damaged Britain, and how space was at a premium, while the adverts for pressed aluminium kitchen units reveal something new, something mass-produced to be clean and efficient, and to go into your home (perhaps a prefab!) in no time. Instant house, instant kitchen.

I do love the colour plates in the book. They give a real feel for fashionable colour schemes of the period. And what an appetite for colour there seems to have been: white kitchen units with apple-green trim painted bright pink inside, striped upholstery, usually in a bright colour plus white ("Stripes are the last word in chic where furnishing is concerned."), fabrics with very large-scale prints or woven patterns (such as in the image from a Rosebank Fabrics advert further up the page)... but not wallpaper. Not even an advert for wallpaper. Everything from prefabs to Kenwood food mixers to Max Factor Colour Harmony makeup is advertised in the book, but not wallpaper. I guess rationing was still having an impact there. 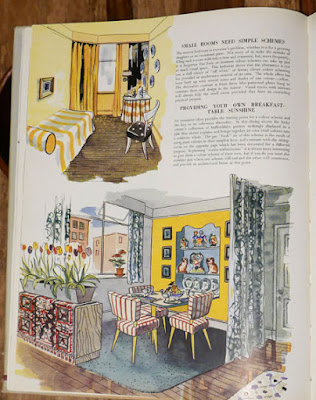 Anyway, I'm dead chuffed with this book. I don't have a 40s-style home, nor do I plan to, but it's really lovely to get a glimpse into how the country was rebuilding after the war.