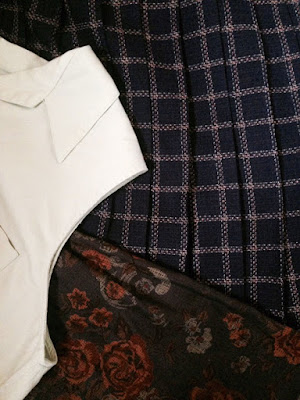 My local charity shops had been delivering slim pickings before I went away, and I'd started to think that they simply weren't going to have anything decent any more, but this week I felt the real urge to have a good trawl round them and it paid off.


I seem to be finding more and more St Michael garments. For non-Brits (or very young Brits), this was a brand from Marks and Spencer that ran from the 1920s to 2000, so if you find anything with that label in, it has to be 20th century. More importantly for me, it means the garment dates from when Marks still produced really good-quality clothing.  In recent years they seem to have taken the standard high street approach of making cheap things that won't last and plastering them with pointless embellishments. Yesterday I found a St Michael brown floral skirt, probably best described as 'semi-pleated' - it's pleated at the top but falls into soft folds - with the original tag still on it - for £3.50. Another charity shop delivered a navy Edinburgh Woollen Mill pleated skirt for £1.99, and a third yielded a pale pistachio green sleeveless blouse from BHS for £2. I'm afraid the colours haven't quite come through in the photo.

I don't think any of these items are really old, but they are classics. The sleeveless shirt will be brilliant as part of a 1950s/1960s look, as will the pleated skirt. I'm not so convinced by the floral skirt, though my husband thought it would suit me, so I thought I might as well buy it and see how I felt when I got it home. It strikes me as the sort of thing that can very easily look the wrong sort of frumpy - accidentally frumpy rather than deliberately frumpy - but I hope with things like my Burmese agate beads, and my steampunky brown heels it will be fine. I'm not very good at accessorising, being naturally minimalist by inclination, but I am starting to understand how one or two really eyecatching pieces can make an outfit. 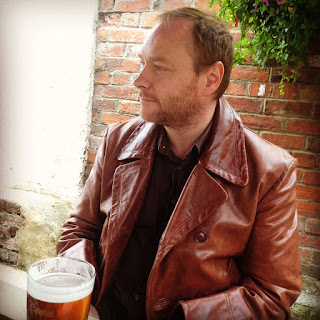 Mr Robot made the best purchase, however. In addition to a book of essays by Alistair Cooke (who did 'Letter from America' on BBC radio from 1946 to 2004), he found three plates he liked and a rather splendid brown leather jacket. I think it's very Life On Mars, but in a good way.
Labels: charity shopping clothing