Back in time for dinner: the time travels are over 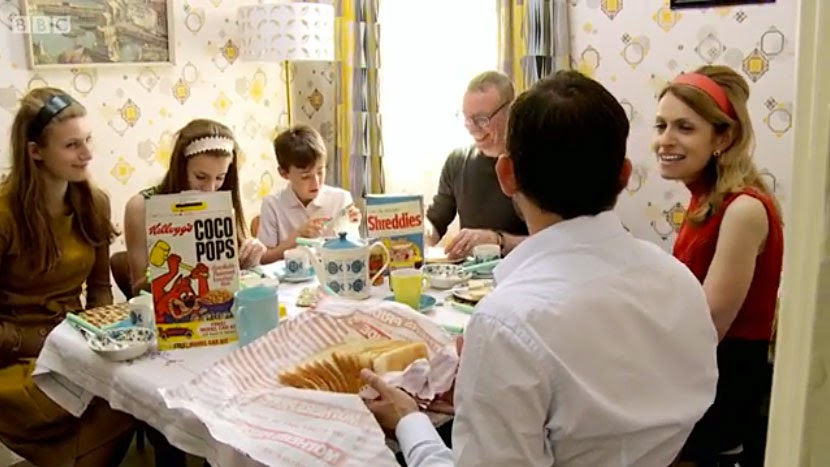 Back in Time for Dinner came to an end this week, and I'm quite sad to see it go. I really enjoyed sharing the journey of the Robshaws, following them from the 1950s to the 1990s and then, for one final episode, into the possible future of food.


The way the kitchen and living room was made over to match each 'decade' was brilliant, and the 1970s one really pushed the nostalgia button for me. Oddly, the 1980s one didn't – and I was shocked, SHOCKED I tell you, that their crockery wasn't Eternal Beau. As a guttersnipe in the 1980s, that china and the way you could get absolutely everything to match, struck me as the height of sophistication. I'd gaze at it in the Grattan or Argos catalogue and marvel at how fancy it was. Before the 1990s episode I wondered if they'd have any Jeff Banks Ports of Call china, and lo, their dinner plates were just that. I still have some Ports of Call pyrex; my late nannie bought it for me and it reminds me of her every time I use it, so even though I'm not fond of the pattern, I'd never get rid of it. Did any of the homewares ring bells for you?
My favourite kitchen was probably the 1960s one; I loved the blue colour and the geometric wallpaper. The 1980s one was my least favourite as it felt so cold, with all those icy whites and greys. Thinking about it, that's a bit weird as blue is hardly a warm colour, but the 1980s one just didn't feel welcoming. Whatever era the episode was set in, I constantly found myself wondering how long it had taken the programme makers to collect everything for each episode, especially for the earlier ones. Finding full dinner services can't have been easy or cheap.
I really liked the way the family thought about the social changes that would have been going on, and that were reflected in what and how they ate, the way cupboards got fuller, and new gadgets (fridge, freezer, microwave) slowly crept in, and they started eating together less frequently. They also noted that their diets were getting less healthy. Nothing was said about the other aspects of every day life, and I did wonder about laundry in particular, as that obviously affected the amount of time a housewife would have had. The experiment only seemed to concern food.
One thing I've noticed on social media is that Rochelle got a lot of criticism, which I agreed with a little, but mostly thought was unfair. She's Jewish, so having a go at her for not knowing how to cook gammon for her family was a bit much. Her ineptitude at opening any sort of tin with any sort of tin opener was staggering, but the way it came into every episode made me think the programme makers had worked it in as a running gag, which backfired in the way it made people see her. The family is a modern family, dad Brandon prefers cooking, so usually he cooks. If Rochelle doesn't usually want to cook, that's her choice. That's the beauty of living nowadays. On the other hand, food is fundamental to human existence so I find it a bit weird that someone can't cook at all. Fair play to the whole family, though, for taking part in this fairly lengthy experiment, which must have been tough on them.
As they were following set menus a lot of the time, a lot of the joy of cooking, the creativity, would have been missing. Personally, I don't think I'd like being told exactly what to cook for six months, especially without access to my spice cupboard to liven up the rationing-era dishes. The BBC probably would never do it because it's too expensive, but if they were to do something similar in a future programme I'd love to see a broader range of people (couple, family, student etc) all being given the food and cookbooks from an era, but then given free range to work with those things and see how they cope over a number of weeks. However, what is definite is that a three-part series on Victorian baking has been commissioned, in which professional bakers (who can probably open tins) try their hands at Victorian rural baking, baking in an industrial city, and making bakes and confectionery for the high end of the 19th-century market, all with Victorian equipment and ingredients.
In the mean time, a new programme is taking the Back in Time for Dinner slot, 24 Hours in the Past, in which six celebrities get to 'enjoy' a day in four different Victorian (Victorian is the new black) workplaces, starting with a day at a dump. Lovely. I have to say, as much as I like presenter Ruth Goodman, I'm less enamoured of most of the celebrities involved, so I don't think I'll enjoy that as much as Back in Time for Dinner. If you watched Back in Time for Dinner, what was your favourite bit?
Labels: food television