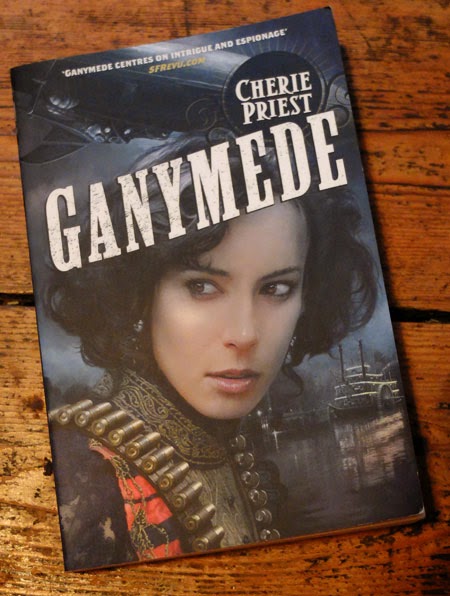 I am reading Cherie Priest's excellent Clockwork Century novels completely out of order (to date I've read the first, last and now the fourth!), and one of the things that makes them so brilliant is that you can do that. While there is an overall chronology, and all are set in a technologically advanced 19th century, where the American Civil War has been raging for decades, each volume works fantastically as a standalone story.

Another of the things that Priest does brilliantly is create a variety of characters. They're not mostly white, mostly male, mostly straight, mostly able-bodied or mostly cis. This is steampunk for everyone. One of the central characters in Ganymede is Josephine Early, a free woman of colour and Madam of a high-class establishment in New Orleans. Her pirate brother has got hold of a prototype submarine, the Ganymede, which they wish to deliver to the Unionists, but it's a dangerous machine and Josephine believes it will take a talented pilot, rather than a sailor, to deliver it. Enter former pirate, Andan Cly, who wants to earn enough to settle down in Seattle and run his own airship dock.

The importance of both the civil war, and the zombie-creating 'blight' gas (and resulting drug) from Seattle is of differing importance in each book. In this one the war takes prominence, with the people of New Orleans keen to rid themselves of the occupying Texians, who are allied to the Confederates. Getting the Ganymese to the Unionists, away from the Texians – who are prepared to raid the pirate stronghold of Barataria to find it – is a priority for Josephine. Nonetheless, the walking dead are becoming a problem, and the people of New Orleans are more prepared to believe in them, and tackle them, than the Texians. Priest cleverly keeps the blight storyline running subtly in the background in Ganymede. There aren't many encounters with 'rotters' in this book, but their presence in the Clockwork Century world is never forgotten.

I suppose if I had to criticise the three books I've read to date, I'd say that I don't get a strong sense of the individuality of the characters. While, say, Josephine Early and Briar Wilkes (heroine of the first book, Boneshaker) have very different lives and histories, I can imagine they'd behave exactly the same in many situations. They don't seem to have much in the way of quirks or flaws that you can dislike or warm to. But that's a small criticism indeed; these are adventure stories and Priest delivers all the fun and excitement of a traditional adventure via an inclusive cast of characters. Personally, I'll take airship pirates, zombies and pistol-packing Madams over delicately nuanced character any day.

I suppose a stronger criticism would be that for a woman of colour in the 19th century, Josephine isn't as concerned with inequality as I'd expect her to be. Priest isn't unaware of that, and race is a much more important issue in Fiddlehead, where scientist Gideon Bardsley is a former slave. I can appreciate Priest not wanting to create the stereotypical Angry Black Woman, but I guess I expected a bit more fire from Josephine. That didn't stop me from enjoying the book, but it'd be interesting to know how African-American readers feel about it, whether they have the same reaction.

I'd still recommend this book, however. If ever a series was crying out to be made into television, it's this one. (HBO, are you listening? Pleeeeease!) All the volumes I've read so far are packed with great settings and plenty of adventure, and I look forward to reading my next one.

Source: a Christmas gift from my mother-in-law
Labels: books steampunk