Do you know Susan? 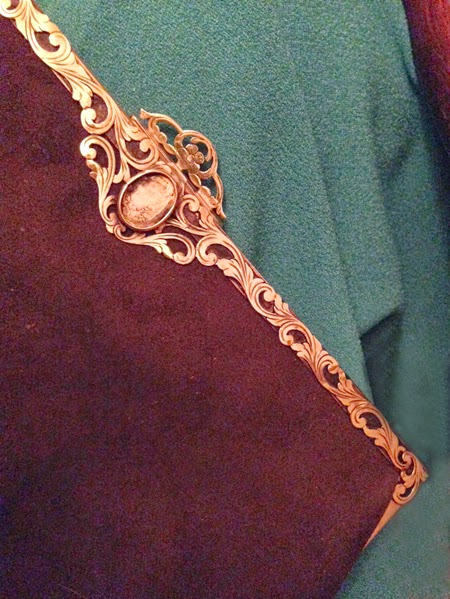 My godmother knows I love vintage, and sends me some ace things. She picks them up all over the place – charity shops, church fetes, all sorts of locations. Yesterday I got a parcel from her containing several things, including this fantastic suede clutch bag. The chocolate brown suede is incredibly soft, and along the top is an ornate goldtone frame. It's in beautiful condition, and even has its original matching purse inside, and a little mirror.

The only flaw I could spot was that something was missing from the front. There's a place where clearly an oval thing was once mounted. My first thought was a cameo, but I honestly have no idea what was originally there. It'll be easy enough to see if Kernowcraft has a gemstone cabochon of the right size and colours to pop in there. I quite fancy tiger's eye or a nice agate.

Inside things get even more intriguing. My first thought was, "Wow, the lining's in perfect condition even though it's pale yellow, and the purse is still there!" The label was the really intriguing part, though. 'MADE IN ITALY FOR SU-AN' Sudan? Susan? My friend Lucy, who knows her leather goods (she's the merchandiser for Duo) suggested it could be Susan of Bond Street. 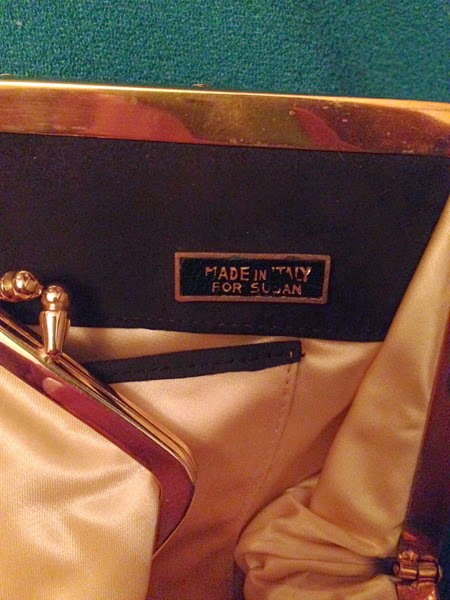 A dig online turned up photos from Vogue September 1959 – not of my specific bag. Google Books is always really good for this sort of thing, as you can find references to otherwise-obscure brands in adverts and magazines. I found mentions of Susan Handbags in 1955 Country Life and 1957 Homes and Gardens, and even a mention in Lord Levy's autobiography where he says he worked for them as an accountant in the late 1960s. The price of the 1957 bag was £4 10 shillings. According to ThisIsMoney's inflation calculator, £4 then equates to around £87 now, so this bag would have been the equivalent of around £100. It looks as though Susan was a high-end brand indeed. If you know anything about Susan, I'd love more information.

Cinderella can keep her silly glass slippers and pumpkin coach – my godmother's a cut above hers!
Labels: 1950s 1960s accessories