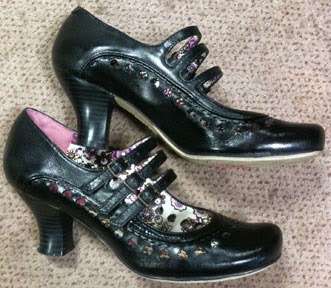 It is spring, and that means my inevitable bleating on about being unable to find shoes.

BUT WAIT! I HAVE SHOES!

I had a patchy year with shoes last year; one pair I mail ordered were too large (bizarrely, the other pair in the same size from the same firm were just fine), and my last pair from Hotter were appallingly bad quality - seriously, the rubber bit on the bottom of the heel fell off after a fortnight, and the leather wasn't even faintly water-resistant, so I spent a lot of time with damp feet and trying to polish out white salt marks when the shoes were dried.

After all that, I decided to try some different firms, and yesterday popped into Hush Puppies. They had a couple of pairs with a 1920s/1930s-looking heel, including these ones. The style is called Freya, and you can only buy it in red online, but they also had brown and navy in the shops, and the assistant said last year they had it in lots of other colourways, so she was hoping for cream again this summer. I guess the lesson there is, drop into the shop if you can as they might have even more choice! I really loved the little heart cut-outs, and I thought they would look great with colourful tights.

The other style I liked was Lonna; if I like these I might pop back in a few months for a pair of those – I'm hoping for a more summery choice of colours later in the year. 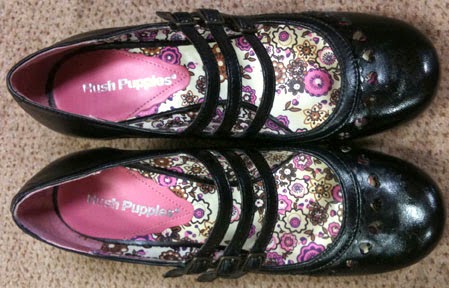 That isn't my carpet, by the way, it's work's. This is what happens when you get moved into an area previously occupied by games magazines...
Labels: accessories shopping