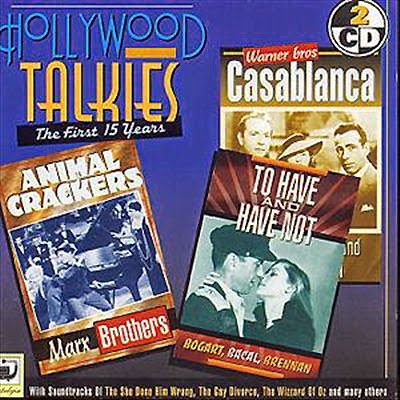 Covering the late 1920s to early 1940s, this is a compilation of songs from Hollywood films. Lots of big names are present, including Fred Astaire singing ‘Cheek to Cheek’ and ‘Night and Day’ and Judy Garland performing ‘Somewhere Over the Rainbow’.

As far as musical styles go, it’s a mixed bag. In particular, Gloria Swanson singing ‘Love Your Spell is Everywhere’ is a little high-pitched and operatic for modern tastes, and Al Jolson’s ‘Sonny Boy’ and George Jessel’s ‘My Mother’s Eyes’ dreadfully sentimental. On the other hand, Ginger Rogers’ ‘Strings’ and ‘I Used to Be Color Blind’ are an absolute delight; they’re natural and lively, and you can hear her smile in her singing.

I do wonder if the varying styles reflects the switch in popular entertainment from musical theatre to musical films, as Gloria’s song is from 1929, very early in the days of talkies, and in style it reminds me of recordings I’ve heard of Gertrude Lawrence. Other singers of the earlier songs - Helen Kane (‘I Have to Have You’), Sophie Tucker (‘I’m The Last of the Red Hot Mamas’) and Eddie Cantor (‘Making Whoopee’) – were bona fide 1920s stage stars before performing in films.

Two of the songs in this collection (Bunny Berigan's 'I Can't Get Started' and Hoagy Carmichael's 'Baltimore Oriole') are among my all-time favourites.

This isn’t a CD set I usually play in its entirety. The songs are split over two discs, and the second one, with the later, more swingy, ones is definitely my favourite. There are some tracks I skip every time I play the set. I’m glad I own it, though, as it does give a real picture of how songs in films changed radically in style over their first 15 years.