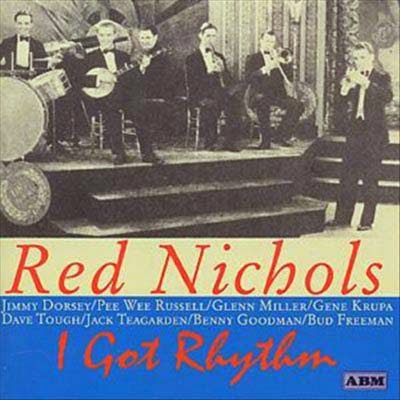 I started to listen to 1920s music a rather long time ago, and cornet player Red Nichols was one of the first musicians I really became aware of. This CD is a collection of tunes, all with contributions from Red Nichols, frequently as band leader.
Spend much time listening to music from that era and you’ll realise how fluid things were, with members of bands moving from one group to another, and in the case of acts like The Charleston Chasers, existing purely for recording purposes. Because of that, if you collect compilations of 1920s music, you may well have some of the tracks on I’ve Got Rhythm on other CDs. For example, I have some on a Charleston Chasers CD, another on a Miff Mole collection, and others on general compilations.

This is good time music. It’s upbeat and intricate, the various instruments weaving in and out of each other as though they’ve had a touch too much of the Real McCoy and are meandering happily home. Every so often a clarinet, trumpet or other instrument will skip merrily off on its own, while the rest oom-pah along behind it. It’s a collection that’s fantastic for dancing to – when I listen to it, I really do wish I knew some 1920s dances. It also makes ace background music for an event, but its intricacies mean that it’s also enjoyable just to sit and listen to, and marvel at the complexity.

I suppose if I have any criticisms, it’s that a lot of it is very similar in pace and feel, and there’s no vocal. This isn’t my favourite 1920s music CD (that would probably be either my Charleston Chasers one or Annette Hanshaw Loveable and Sweet), but it’s decent enough, and I listen to it fairly often.

Source of CD: I bought mine from Duck, Son and Pinker of Bath when it was still open. However, Amazon is selling it for £5.99.
Labels: 1920s Music