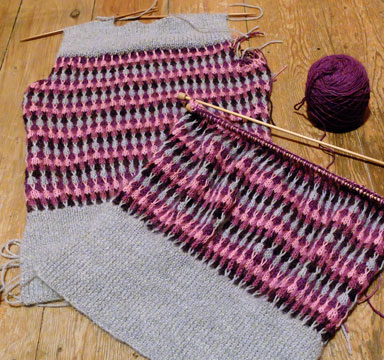 I started knitting this at the end of January, so by my standards (navy cardigan: a year and a half to complete) I'm rocketing through it. I knitted the back first, and that was a good idea as I've been able to hold it against my front and see how it stretches. The pattern says to knit the front to match the back, but that won't work for me. I'm adding subtle increases to the side so that by the time I reach the chest area, there will be a couple of extra inches of cloth there. I'll take out the extra increases at the same time as I work the armholes, to avoid droopy shoulders.

The shoulders are on double-pointed needles as I plan to do a three-needle cast off there. It really does give the best finish to shoulders, I feel - much more even than casting off the front and back separately then sewing them together. 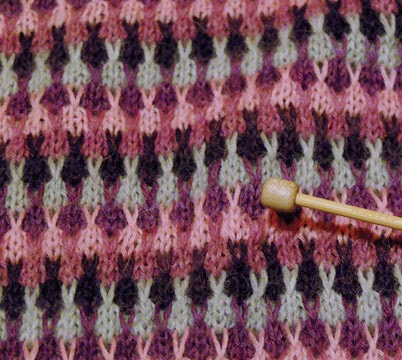 If you're a knitter you'll probably know this already, but here in the UK knitting wool was rationed during the Second World War. I'm pretty sure - though not 100%, so do correct me if I'm wrong - that free wool was available for knitting for servicemen. However, I do know that for home use, it was rationed. Darning wool, however, was not rationed, but it came in short lengths. Also it was an era of make do and mend, and if you'd worn out a hand-knitted garment, torn a sleeve or whatever, you could carefully unpick the seams, reclaim the rest of the yarn and knit something new with the fragments. Fair isle and other colourwork designs, like this one, were attractive ways of working with smallish amounts of any one colour.

So far, this pattern has been staggeringly simple, hence the speed at which it's coming together. At this rate I may be able to wear it while the weather is still cool enough...
Labels: 1940s knitting