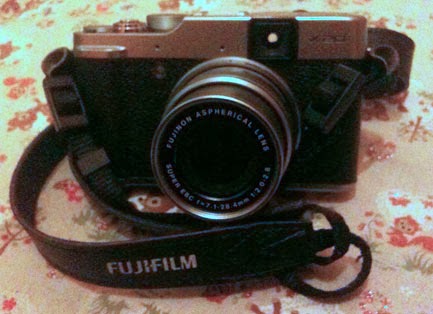 Please excuse the ropy photo; I had to take it on my iPhone - elsewhere on this page you can see what he's capable of, and it's much better quality! George is a Fujifilm X20, and has a name because when I was thinking of buying this model of camera, it was not cheap and so I vowed if I did buy it, I would love it and pet it and call it George. In the end I did buy it, because I’d had some extra work that would cover the cost and I didn’t want to lug a D-SLR all the way to Myanmar. Mr Robot (who has his own photo blog called Gettins Images) took his SLR, tripod, lots of lenses and masses of other kit, and I just couldn’t face carrying all that.

My day job is on a photography magazine (not taking pictures, I hasten to add!), so I had a quick look in the review cupboard and spoke to our Test Team about what I was looking for, and tried some things out overnight before making my decision. People suggested a CSC - Compact System Camera, a little one with interchangeable lenses, like the Nikon 1 series - but I was adamant that I didn’t want to faff with changing lenses, so stuck to compacts. I actually preferred the layout of dials on a different Fujifilm camera, the X100s, but that had a fixed 35mm lens and I knew I’d want a zoom on holiday.

It is true that you can do more with an SLR than with a compact, but most of the time I couldn’t face getting one out. This may not have quite the creative potential of an SLR, but I’m much more likely to use it. Less complexity used frequently is better than a do-anything camera I never take out of its box. Being quite small, my Fujifilm X20 is very easy to carry around, and when I get my camera out it doesn’t alarm people in the way a monster SLR does.

Retro-looking cameras seem to be becoming more popular. Nikon recently released the Df, an SLR with vintage appeal. There’s no shame in preferring a retro look as there’s much more to this sort of camera than a bit of fake black leather. They are usually more angular and feature more buttons and dials on the body. Some people don’t like all the dials, preferring to do everything in the modern way via menus on the LCD, and it’s true that in certain modes the dials can be misleading as your camera has control of those things, so altering the settings on the dials won’t make a bit of difference. However, I prefer them. I like seeing my settings. I like being able to feel the changes.

I also like the fact that Fujifilm have made their compacts able to replicate classic film stock, including the legendary Fuji Velvia film, so my retro camera can deliver old-school colours. We do have film cameras at home; the oldest is a 1930s Voigtlaender. However, things are a lot easier when you don’t have to develop film yourself! George speeds things up a lot, and hopefully he is improving the photography on my blog too.