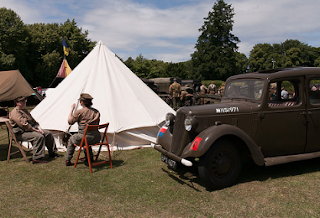 Last weekend was the Armed Forces and Veterans’ Weekend in Trowbridge. This is an event that’s been growing over the years, and as well as displays from current units and branches of the armed forces there’s usually a section of re-enactors and history group displays.

I have complex feelings about events like this: I’m very proud of our service personnel, who do difficult work in dangerous places. My father and grandfather were both career military. Against that is the reality of death. Weapons will always make me think, “This thing only exists to kill people.” I suppose when it comes to the military and military history I’m interested and respectful, but also serious. I’m glad we have people prepared to defend rights and freedoms, but sad that they should have to do it at all. The history side helps people think about how wars occur, the awfulness and human cost of it all, which no-one should ever forget.


Anyway, serious bit over, there was a large re-enactment and history area this year. It was great to see some displays of French military vehicles, including a mockup of a shelled French cottage. We got chatting to a gentleman who’d got a tent set up the way it would have been in Africa in the 1870s, complete with folding desk and bed and a rug on the floor. Another chap talked to us about his collection of mine detectors and compared a vintage probe with the sort still issued to soldiers to use if they suddenly realise they’re in a mine field - there’s not much difference between the two, and it’s sobering to think that even now people’s lives can depend on something that looks like a short, stubby car aerial.


One very good history display was on finding Wiltshire’s forgotten First World War soldiers, and on some of the soldiers they’ve located and identified. Some of the displays could have done with more information (or chattier people prepared to talk about what they were showing), but Finding the Forgotten’s stand was really informative and interesting.

A couple also brought their vintage Rover, and they allowed me to sit in it. It was a gorgeous car!

It would be lovely to see displays that also relate to the general community in future. Trowbridge has a large Polish community, including many ‘old Poles’ who came to Britain during the Second World War, and it would be great if some re-enactors covered the Polish forces – perhaps 302 or 303 Squadron from the Battle of Britain. That would be especially appropriate as Trowbridge was a centre for Spitfire production during the war. Still, the event is growing each year, and hopefully the re-enactment/history side will grow ever more interesting and diverse too.

I managed to miss the 1940s music and dancing. Not sure how that happened. Every year we go, we seem to miss the bit we’d really enjoy, it always happens later than our visit. So for me the highlight of the day was seeing a Dakota fly over later, when we were enjoying a beer outside a pub. Such a beautiful plane!

Interested in vintage and retro events in Wiltshire? Check out my listing of What’s On In Vintage Wiltshire 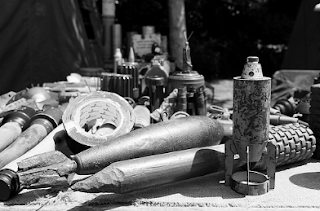