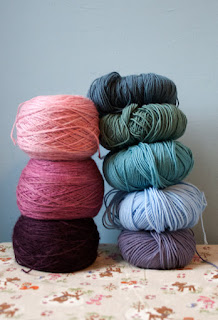 Colour. Some people have an amazing gift for it (my friend Judy, who blogs at SkyLightRain, wears amazing mixtures of fuchsia and teal, to the point where I now think of those shades as 'Judy colours.) I'm rubbish with colours. That could be the result of a gothspent youth; while I may not be very good at combining colours, I rock at textures. Give me a pile of black coats, and I'll find mine immediately!

Knitting has been a massive help to me as far as colour goes. To start with, it helped me work out which ones I really like, because when you're as slow a knitter as I am, you won't be prepared to spend weeks or months looking at something you're not keen on. My tendency is, though, towards subtlety. I like black because no-one notices it. I also tend to pick shades that fade into and out of each other, if not the background. Unfortunately this is going to be very little use on one of my future projects, as I'm making plans to knit the Wartime Farm Fair Isle tank top.

I had a rummage through my yarn boxes today. I did feel the usual sense of guilt that I had so much yarn just hanging around (I need to have a serious charity knitting session later this year), but it was nice to see so much potential in there. I just need to get my head around the colour combinations needed for Fair Isle. It looks simple, but the more colours there are in a piece, the more complicated it gets. Work with two colours and it's easy: a light one and a dark one, job done. Add more colours, though, and simply contrasting light and dark isn't enough. The dark colours need to be distinct from other dark colours, the light ones from other light colours, but they all still need to work together. There are six colours used in the Wartime Farm pattern, and as much as I love the colours in my stack of muted blues, teals and lilac at the top of this piece, I'd be wasting my time if I used them alone for Fair Isle, as they're too alike and the pattern would get lost. 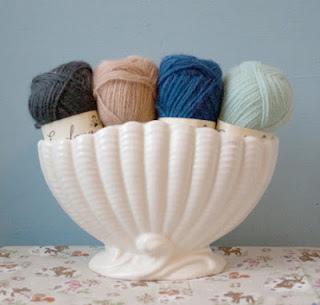 Susan's own yarn, Excelana, is a good starting point for me. I've got a number of balls of it, and I'll definitely use some of them, probably the charcoal, dark blue and deep burgundy. I'm thinking of replacing the biscuity shade with ivory, the lemon with beige and the mint green with a pale sage green. I'll only really know if my choices have worked once I've done a swatch, though – so I'd better get on and finish Mr Robot's socks and my navy cardigan!