Casablanca on the big screen 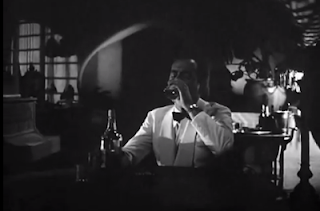 Yesterday Mr Robot and I went to see Casablanca at Komedia in Bath. I'm not Komedia's biggest fan, but they do sell beer and awfully good popcorn. It was Valentine's Day, but that's not why we went. It's one of Mr Robot's favourite films, and as there was only one showing, we had to go on Valentine's Day, like it or not.

If you don't know the story, it's a tale of a man (Humphrey Bogart) re-encountering his lost love (Ingrid Bergman) – along with her heroic husband. Even if you've never seen the film, you'll know the lines. "Of all the gin joints in all the towns in all the world, she walks into mine." "We'll always have Paris." You know the song, As Time Goes By. The reason you know these things? Because it's simply a great film.

I know I always say it, but there really is nothing like seeing a film on the big screen. We'd seen Casablanca dozens of times at home, but we still enjoyed it even more at the cinema. It gives you a chance to appreciate the beauty of the sets, and you hear the songs so much more clearly – seeing a film in this way really does give you more of a chance to appreciate all the details. I haven't been able to find a schedule of showings for the UK, but it does seem to be touring at the moment, so keep an eye on your local indie cinema's listings for it.

Edit: I forgot to add, there was a trailer for the Baz Luhrmann film of The Great Gatsby. Mr Robot was especially unimpressed with the speeding cars and flashy shooting; he said all it was missing was a big explosion. I still don’t like the use of modern music. However, the one thing that’s undeniable is that from the trailer it looks like being very much a Baz Luhrmann film, not some bland, dull thing, and there’s a lot to be said for that. If any decade’s made for fantasy, it’s the Roaring 20s, so this could be Luhrman’s dream of the jazz age.
Labels: 1940s film noir